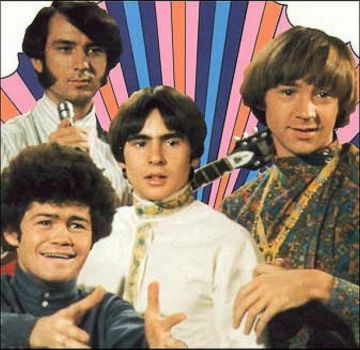 Thanks, GBAR. I'm glad somebody else can remember watching this show.

I don't remember the programme, but I read about it in The Monkees monthly magazine when I was about 12 or 13!

Is there anyone around, as ancient as me, who can remember that the fellow in the bottom left of picture, Micky Dolenz, starred as a young boy, Corky, in the 1956-58 television series called Circus Boy?

The Monkees are an American pop/rock band that released music in their original incarnation between 1966 and 1970, with subsequent reunion albums and tours in the decades that followed. Formed in Los Angeles in 1965 by Robert "Bob" Rafelson and Bert Schneider for the American television series The Monkees, which aired from 1966–1968, the musical acting quartet was composed of Americans Micky Dolenz, Michael Nesmith, and Peter Tork, and Englishman Davy Jones. The band's music was initially supervised by producer Don Kirshner.
Described by Dolenz as initially being "a TV show about an imaginary band [...] that wanted to be The Beatles, [but] that was never successful",[1] the actor-musicians soon became a real band. As Dolenz would later describe it, "The Monkees really becoming a band was like the equivalent of Leonard Nimoy [who played the alien officer Spock in Star Trek] really becoming a Vulcan."[
Here are two of my favourite songs