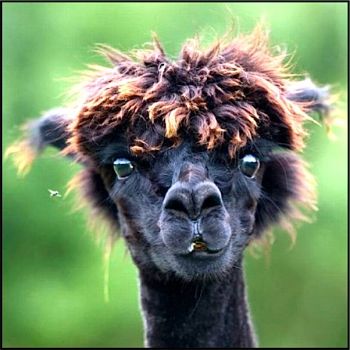 Created by JiggyBelleS Published 23 October 2012
Why this advertisement?

If one more person says I'm having a bad hair day, I'm gonna spit in their face!

I noticed the fly as well, just didn't say anything as to not insult this dear creature (tee hee tee hee!)
As to what else might be possibly living in its hair. . . . eeeeeeeeuuuuuu !!

That fly bothered me, too, Rebecca! I wondered what else was livingin his hair!

Healer - that is hilarious!

Francine - a different take - but I LOVE it!

There is something white in her mouth...so...

PUT OUT THAT CAMEL, LAMA....you're too young to smoke!

Hope you all noticed the fly on the left - says it all!

Such a sweet face and such BAD hair! What a great group of captions! You were hilarious today! Thanks so much for giving us so much fun!!

You guys have me laughing so hard, I can't think!
And I'm singing too! Thank you very much!
Lama me think on this, and I'll get back to it.

"Is this where the tryouts are being held for the movie ' Bambi'? "

OMG, this poor dear's so ugly he/she's cute! Looks like the sensitive type, don't you think? Did someone get him a wig at the dollar store. . . looks warm for the winter. " Pucker up folks, I need a hug & a little smooch!!!"

Who you looking at???

I've been told I look a little like Audrey Hepburn.

Su, thanks, hadn't heard that song in years. Catchy.
~Jan, thanks for posting this series. I rarely can come up with anything but always chuckle at the image and the humourous comments.

And now some clips from the new Mod Squad series staring Rip Taylor in all three lead rolls.

I couldn't decide which one to go with Francine . . . lol

Oh Su, another groan and I love it. Am singing away with your rendition of the lyrics.

Trini Lopez' - both versions are great.

Well I couldn't really leave it like that could I?
http://www.youtube.com/watch?v=VaWl2lA7968

I am the The Dalai Llama . . . I used to meditate all day but these days I only do it now and zen

NOooo, I said just a trim and a few highlights! Eeek, it's even attracting FLIES!! I won't be able to show my face for 2 months - see you in People's Court!

ROFLMBO so far!
Tina Turner? Shame on you Hester, I am one of her biggest fans. "You'd Better be Good to HER!"
LOL

Tina Turner had let herself go a bit.

That apple was so sour it took the curl right out of my hair.

I'm never getting my hair cut at a beauty school again!

Whattcha lookin at? At least I HAVE hair!

The Donald Trump look wasn't quite what she'd had in mind when she called in for a wash and blow-dry.

Wilbur favoured the Bed- head look. Casual, unaffected, Llama About Town...he just couldn't work out why the ladies weren't falling at his feet.

I've washed my hair and can't do a thing with it.