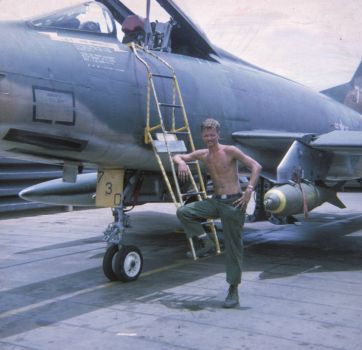 Just a side note bill1943, more than once, I've crawled down that intake scoop to try & locate an oil or hydraulic leak, while you or one of my engine men motored that engine over to @ 15% with the air start cart & generally we were able to complete the "fix" without having to remove the engine & run it on the test cell to locate the problem, thus saving many man hours & getting the Aircraft back to operational status ASAP. I know, its not "in the book", but then we did a lot of things that were not in the book. Thats why all of us were the best there were at what we accomplished. I've got a lot of hours in the cockpit doing ground run-ups & trim pad operations, semper-fi

Yeh Bill1943, I'm Bill 1932, I was a Tech/Sgt at that time, & we worked real close with you crew chiefs & asst,. crew chiefs. Yes while the Aircraft was on the ground it belonged to you, when it was in the air it belonged to the Pilot, you granted the pilot permission to take your Aircraft up in the air & play with it, but don't bring it back broken, though sometimes it did get broken & that is when you & us Specialists worked together to give that Pilot as close to a perfect Aircraft as possible. We were all one big team. Glad to meet you, we were all a "Band of Brothers" & still are.

This was my aircraft. I was ranking s/sgt on the night shift in Vietnam. In the air force the air craft were assigned to the crew chiefs. I was the crew chief on this air craft.

Definitely an F-100 parked in a revetment area of a combat zone, could be a crew chief or asst. crew chief or one of the specialist maintenance personnel. The F-100 was used extensively in South Viet Nam along with an assortment of other Aircraft. Note- the 250 lb bomb installed on the inboard pylon I am very familiar with the F-100 along with the F-105, having served in both Nam & Thailand, '66 & '67 as a Jet Engine Spec. in all areas of engine overhaul, install & removal of the engine/components, test cell, aircraft run-up & operation in furnishing the Pilots the best Aircraft possible. USAF Retired