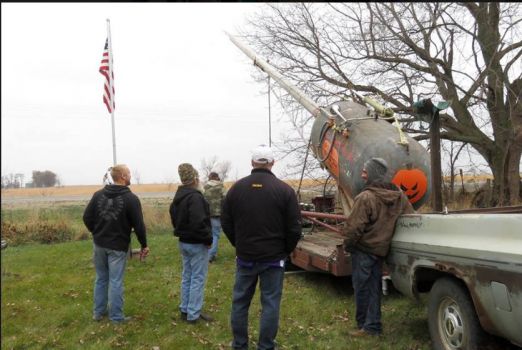 Celebrating Thanksgiving in Nebraska -- punkin chunking. Build an air cannon, aim it at an open field, load it up with pumpkins, and chunk 'em.
Created by Prairiewind Published 22 November 2018

Thanks, Dondi. It is great fun. Unlike a bullet or golfball, when I shot it off I could see the pumpkin fly.

Two of my brothers, a cousin, and a nephew built this one with plumbing pipe and air pressure, and won first prize in Petersburg, Nebraska, two years in a row. While testing with a watermelon, they blasted a neighbors herd of cows. The cows ate the smashed melon.

I brought pumpkins from Michigan in my suitcase for the Thanksgiving shoot in the picture. D.J. and Jim have died since, but I am told nephew Andy is pulling it out for Thanksgiving on the farm this year.

I first read about this back in the '90s, and it was fascinating. The contest was down in Maryland(?), on an abandoned airstrip, and had become an annual event. The early entries trended toward catapults, but people experimented with spring-powered shuttles and all sorts of things. It had become a significant cult event, and people put a lot of thought into their entries.

One man who had won it several years in a row, then skipped a year, showed up with a steam cannon. The man who was out on the runway to mark where the pumpkin landed saw the pumpkin fired by the cannon still rising over his head, and turned and ran - it landed among the cars beyond the runway!

There were some rules - e.g. specifying the size of the pumpkin so everyone had the same challenge. And the pumpkin had to leave the device intact; if it fragmented, it was called a "pumpkin pie shot".

I was surprised to discover, when I moved to Northern New York, that it had caught on and become a regular October event in a number of different places. This year, there were two up here - at Clayton (gateway to The Thousand Islands) and Massena, both (I presume) firing pumpkins out over the St. Lawrence River(?). There are probably a few more rules, given the sophistication of the newer machines. I suspect people enter their creations in multiple contests, whatever is in range. Certainly, given the amount of effort (and money) which goes into designing, building and testing a device such as this, one would want to show it off as much as possible, and share stories with others who have done the same.

I didn't go to either of the events up here, but it would have been interesting to see from how far away the entrants came!