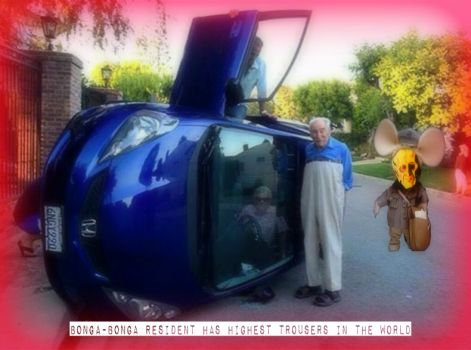 Here we see Mr.Buckingham 'Palace' Bugosi, posing alongside his parked car (and his parked wife), after a pleasant drive through the peaceful suburbs of Bonga-Bonga......
Buck has been honoured with the proud distinction of being the man with the highest trousers in the world - no mean feat for am unemployed layabout!
His wife Gladys, was also celebrating, having finally obtained her drivers licence after 55 years on the road.......
Created by lelabugosi Published 28 January 2016

I just pass by, now and again, I think!

Love it...thanks for all of your solves of my efforts. I appreciate it.

@JiggyBelle
That isn't a link......it just points back to me!

I know...it's similar here...but the politicians keep saying how wonderful everything is...though the wait for things like hip replacements gets longer and longer. Something like that is not life threatening but it still means people are living in pain AND immobile for almost a year unless they have the money to go private. I am thankful for the care we do receive...when you think about living in places like Syria, China...even Russia, but when a child or loved one is sick you just want to scream when they say "sorry" and even the cancellation list is months long. But, chin up, Buckaroo! And tell Mrs. B we're thinking of her. ❤️

Yes.....I went to hosp. today, and they said it could be up to 6 months wait (which would be end of May) but that they would try to speed things up!
Worst comes to the worst, we call an ambulance, but it's all very frustrating.

Are we still "marking time"? ❤

Just wondering about Mrs. B...is everything still "on hold"? ❤

I hope it starts catching on ... I am sick of seeing drawers and butt cleavage

Many years ago I read that Hugh Hefner spent about 90% of his time in pajamas (and out of them), and I have finally joined the PJ movement!

HA! You say "unfounded rumours of the car being 'stolen'" eh? Well it ain't no rumor, my (non-) CIA software CONFIRMS IT DEFINITELY! Of course, the Bonga-Bonga cops won't do anything about it. I wonder if the Bonga-Bonga PD has a Troll Patrol. They might be coming around for you lelatroll!

it's good to feel comfortable, never mind the style police

She is a nubile ole gal then ...bravo for her ☺

I must say I do love the Hi- trousers as I am sick to death of seeing everyone's under garments. If it starts a new trend then I say ...Thank you very much to Buck for that!!
I was also debating how Gladys exits the vehicle. Is there a lift in there for her?

just gave somebody some nice fleece PJ trousers, I only wanted the top part. She looked similarly in fashion

Of course, since this amazing piece of news went round the world, countless wannabe imitators of the 'Buckpal Style' have been coming out of the woodwork........They are all FAKES!......These people are simply pulling their trousers up as high as they will go, posing for a picture, then going back to their normal way of dressing!

I am currently doing battle with bleeding toenails, very painful but all of the podiatrists are busy podiasting...................

LOLLLLLLLLLLLLLLL He is Quite the Rage... My Nephew Just sent me a Picture of your (quite Popular) relative... marveling at his garment and how he got them that high. !!!!

OK, while you were ALL distracted by the entirely superficial and superfluous fashion issue I, using my (non-) CIA software have traced the license plate "6NGY990" and this car was REPORTED STOLEN by Algernon Aloysius Barloff! So obviously Gladys Bugosi is the THIEF who took it! (She's in the driver's seat isn't she?) And she went out for what we here in the Good Old U.S. of A. call a "joyride" and crashed it on probably the first curve she came to. And what does she care? It's the Barloffs' vehicle, not hers! Y'think any judge is gonna send her to JAIL at her age? H*ll no!

So let that be a lesson for all you little kiddies out there. When you steal a car for a joyride while you're underage they call you a juvenile delinquent or "juvie." If you're a young adult they call you a felon and throw you in the slammer for about 3 years, after which you're an "ex-con" for the rest of your life. But if you wait 'til you're 75 you get your picture in the paper and they call you an "adventurous senior citizen."

Meanwhile what about some fair and equal justice for the Barloffs? HA! In Bonga-Bonga? The authorities will probably send the Barloffs a citation for littering the street and a bill for the towing!

And furtherly meanwhile, what's that EVIL LITTLE TROLL doing standing there in the street? OH! Oops! It's lelabug the mailperson! Sorry! You look so much like a troll these days, I didn't recognize you at first. Ha-ha! TROLL! Nya-nya-nya! TROLL!

I'm thinking he only comes in third, regardless of the gender...

Better than those trousers hanging down on your heals... really -

stop thief, he has been in my husband's wardrobe. Since I refused to turn up any more trouser legs he has just had to pull them up

Now just why is he breaking records? How destructive! Doesn't he realize that "vinyl" is now "in"? If he sold a few of his records "Buck" could purchase a ladder to help the little woman get out of the car more discreetly!!! Silly man! He must have some Barloff blood in him!

I love this new fashion of high pants, it is such a plesant change from the last one of low pants.

This way of parking does save a lot of space.....and when you get out, there is much less chance of getting run over......

That is a great fashion trend, and love the way you park cars in Bonga Land