William Matthew Prior, Portrait of a Young Girl In A Gray Dress~dated1841 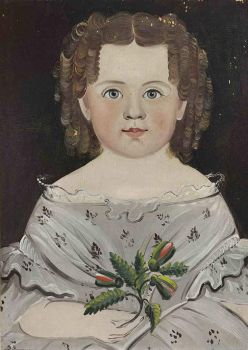 William Matthew Prior (May 16, 1806 – January 21, 1873) was an American folk artist known for his portraits, particularly of families and children.

Biography
The son of Captain William, a shipmaster, and Sarah Bryant Prior, William Matthew Prior was born in Bath, Maine on May 16, 1806. Prior completed his first portrait in 1823, at the age of 17 after training under Charles Codman, another Maine-based painter.

In 1840, Prior moved to East Boston, Massachusetts from his native Bath with his in-laws, notably fellow painter Sturtevant J. Hamblin, to invigorate his career as an artist. The paintings of Prior and Hamblin, when unsigned, are so similar in style as to be indistinguishable, and are commonly attributed to the "Prior-Hamblin School".

He was a follower of the preacher William Miller, who prophesied that the end of the world was imminent. Prior wrote two books about Miller's teachings, The King's Vesture (1862) and The Empyrean Canopy (1868).

Prior died on January 21, 1873 and was interred at Woodlawn Cemetery in Everett, Massachusetts.

About 1,500 portraits are attributed to Prior. His works are in many museums and institutions around the United States including the Harvard Art Museums, Museum of Fine Arts, Boston, and the National Gallery of Art.
Created by Dollcollector Published 12 January 2021