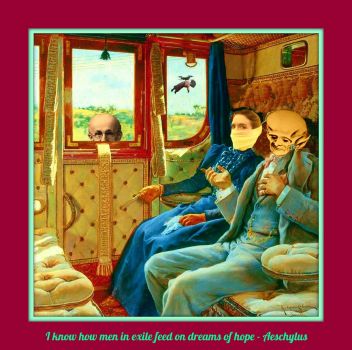 Well here am I, aboard the Bonga-Bonga Expresso as it whizzes through the desolate frozen landscape of Siberia. Mrs.B was permitted to accompany me as far as the border with Mongolia, but could pass no further, as she remains in exile along with the rest of my family.
Uncle/doctor Adonis B Bugosi hung on bravely to the outside of our compartment door, in a desperate attempt to escape his detention. He suddenly disappeared from view as we crossed Lake Baikal, which is the deepest lake in the world. I hope he didn't get wet.
And sweetlittleoldgranny escorted us as far as the border, unable to utter a single word.

It remains for me to issue a wish for the future liberation of 'The Bonga-Bonga 13'!
Created by lelabugosi Published 14 June 2017
Why this advertisement?

You are astute, Faye. Your words are spot on!!! Thank you for putting things in perspective for Lela!!!!

I've kissed baby toes...and blown on babies' tummies...and done "This little pig went to market"...and "Walk around the garden like a teddy bear"...but then I didn't have to bend over for that. Now, if someone like Orlando Bloom or Pierce Brosnan were on a raised dais...wearing clean socks, I MIGHT consider kissing their feet while I was wearing one of those M95 masks...however...they would have to help me get up...and then take me out for a glass of wine...or two...

I see 3 of us with avatars of our dogs.

Which animal with the bushy tail?

Thank you ....... Some people have obviously been sent here by the NASTY foreign press ........ If this goes on, I'll have to stop all interviews, apart from with those connected to the animal with the bushy tail of course.

How appropriate that you wrote that all in CAPITAL letters—that’s the BEST way to write those words! (Plus you also in addition used an exclamation point, too!)

As you said, "Thank you, Oh Great Leader of Bonga-Bonga" you bowed down and kissed my feet. I politely said "Thank you . You may get up now."
I certainly saw no hands flailing!
THIS IS FAKE NEWS! NEXT!

PREPARE THE FIRING SQUAD!!!!
Don't go calling our fearless leader a doofus!!! Only his wife can do that.

Taking lessons from others on how to be a doofus, I see. What a shame. I thought you had good qualities in a leader.

Good luck, Robbie. I hope it misses you.

Thinking of you. Please stay safe.

Hi CL, good to see you too, now we are looking at the first disturbance of the year. Down near Florida and Bahamas and heading our way. Hopefully not too bad, will find out next week.

Good to hear from you Robbie. I wondered what happened to you and Jenny. Especially after that hurricane!

Thank you . You may get up now.

Oh, and a belated Happy Birthday to youuu, squashnoggin!

There is no lack of evidence for that plea!!!!!

I shall plead insanity!

A shame, really. You had a chance to make points.
What it be, is what it be.

TSK Tsk...Buy her something and tell her you were disinfecting it for her safety!
But make it something good, it is your only chance of looking gallant in this.

You are so doomed

My advice? Grovel. Grovel with flowers. Then cook her a gourmet meal.

Congratulations mate, Mrs. B probably deserves a medal?!
Ya got it JM!

It WAS our wedding anniversary ....... Naughty me completely forgetee!

Heidi-once-of-the-half-beard ....... Mrs.B would thank you, but we are now not talking.

I am VERY impressed at how forward thinking your good lady was in protecting herself from these awful bugs, lela. We should all have been following her example for quite some time.

I'm not sure if Washington State WAS the first state hit. They were just the first to report it. They're now discovering deaths in the USA in other states from last Decenber, and cases from November.

Hey mates, what it is?! Good to see you both cooling out in the coach again lela! Glad to hear you are both well, hope it stays that way.
We sure are sorry to miss you this year gem, hopefully next year........although the future seems a bit wobbly right now. Take care of yourselves, all of you!

See how Mrs. Bugosi was ahead of the times back then?!!

Many people 'over there' seem to think they are so special that they are immune!

All too well...we get all their news. Washington State was one of the first hit...and hit hard. Fortunately they have a governor as sensible as New York's. However, their population is one and one half the size of British Columbia's but their infection and death rates are still three times BC's.

Well just glad to see your country is keeping its borders closed - you know what lurks on the other side!!

Good. This puzzle popped up in my notifications and I just wanted you to know that I'm thinking about you, too...and hope that you're both staying safe.

P.S. We had hoped to visit with Robbiel and his lovely wife this summer but unfortunately, Covidiot has put an end to those plans. :(

Contrary to those malicious rumours of years ago, we appear to be still alive, preciouspebble!

Just checkin' up on a friend...and her husband! ❤️

Do hope that you and Mrs. had a fine day today, Lela.

Good luck, Clive! Perhaps you could pop by to visit Andie on your way.

Judy, we've been there before and I can tell you it is not a pretty sight. Cartoon characters returning from sitcoms with missing smiles, lost grins and broken laughter. It truly is a heart wrenching sight. But remember: this is your brain :-( and this is your brain with humor :-) hmmm.... Maybe I've got that reversed?

I'm getting off this crazy train before we have a war over whether or not this is funny.

NO... it was NOT meant to be a joke. Someone just mentioned concern that they had heard Lela's wife may have passed and was distressed. They were just trying to separate fact from fiction... a chore which should be left in the hands of professionals.... like politicians

Your more than welcome Judy!

Good example of how rumors can spread like wildfire.

Stay calm, lela...some people have nothing better to do...we're all glad you and Mrs. B are alive and kicking...well, maybe not all...but all those of us who matter!

I meant that GOMP makes everything into a joke when it isn't meant to be funny.

Thanks for volunteering me, Ghost! LOL

It actually isn't something to joke about GOMP....BE decent and not insane.

@Cyprien1
What's that supposed to mean?

Is this somebody's idea of a joke? I don't find it even slightly amusing.

Please give your beautiful wife a hug from me, and have her give you one from me as well.

@CJ45
I appreciate your concern - care to tell me who gave you this information?

Lela I just heard the horrible news about Mrs. Bugosi's untimely demise. Please accept my deepest sympathy and if there is anything @jals can do for you please don't hesitate to ask her. I'll keep an eye on things here in Bonga Bonga during your grieving process. God be with you my son.

Who on earth told you that?? No, it is not true at all.

These little characters are quite interesting. Master Henry and Ghost of MrPort....Very interesting indeed.

Master Henry you're as silly as ever and that's what sister and I love most about you! Is everyone treating you well. Are you keeping our lawn mowed? You did move the inflatables didn't you? Well darling I have to run They have me doing two shows daily on weekends here in Ghostvegas. Kisses and hugs darling!!!

And I miss auntie Gawl-of-the-darning-needle.......especially our weekly mud wrestling games!

Hey...........everybody says HEY EVERYBOBY! Gawldarn was wanting to know how Master Henry was getting along. She and Also miss all of you dearly but especially Master Henry. He's such a special child!

Oh dear Dr.A.C.B., my Culpie, how I do wish things were back to normal. I so miss being under you back at the hospital!

Yes, it would be really weird if Dr. A.B.B. was NOT looking in the window!

Not to a true Bonga Bongan. ;)

Its frightening how weird this is.....

If that's where the quack has taken refuge during his banishment, he's a lucky guy. That looks like a wonderful camp.... but then, I adore reindeer!

Well, except for the ears, I think he's using your postman disguise, lela...short...

I think he may be here -

Well, if you have to sacrifice any team members in your daring escapade, make it Roger and Henry! Okay?

I am working on obtaining the liberation of my precious and precocious family members. We will not succumb to caging, cajoling, repression, oppression, bargaining, bartering, beating, berating ........ neither words nor deeds will harm us.......We will laugh at the burning crosses on our lawns, and set fire to the discarded hoods of our would-be tormentors........
All is still in the planning stages, of course.......

If TPTB thought BonaBonga, upper and lower, north and south and east and west was tantalizing look at the 96 piece puzzle under recents. Church Lady would not approve. So really, what is the standard? Huh? Huh?

Perhaps we need to draw straws on who we want to be freed. Take a pole as it were. I go along with Heidi. Free the 11. No Master Henry and no Kaleido-boy. We need SLOG first. And of course Dr. Adonis B, Gawldarn, Mrs. B., etc. Lela, are you working on freeing any of them or one of them or none of them or all of them or some of them. Ooops I need some tadpole now or did I just have some or a little?

Surreal_Heidi what about the noble age old tradition of women and children first? You know how much the lad means to Auntie Gawldarn.

No No No!!!! Master Henry belongs in a reform school, not among the innocent public!!! Free Kaleido-boy first!

Concerning the freedom of the of the 'Bonga-Bonga 13' as a former member of United Bonga-Bonga Children's Fund I think it imperative to secure the release of little Master Henry first. He is still in his formative years and there is no telling what those people could be planting in his head (and strictly between you and me there's a lot of room for planting there.)

Sniff, Sniff. I had a dust buster once. It was a blockbuster as it met its' demise on a large block of wood. My floors have never been the same since - all those cobwebs and dust bunnies you know. As for the cover - well I had a roommate a long long time ago who never put it down. Will be interesting Lelabug to see what your cover-up looks like.

There, there, double-batter - pull yourself together now......Soon I shall publish a new blockbuster, which you will be able to see here.......well, the cover at least.

Whew! I made it. Took a while to read the literature (and poetry?) below. Welcome Home Lelabug. I, we, all inclusive, missed you whilst the long Christmas hiatus kept some in touch with our misery. The snow has ended and we have BongaBonga almost restored. We miss the 11 (as Heidi of the Farm mentioned). Free the 11, let them fly about. Oh but I sob now.

Right on, Heidi...I got your back! And while we're at it: Down with trolls! (Petitions available in the lobby!)