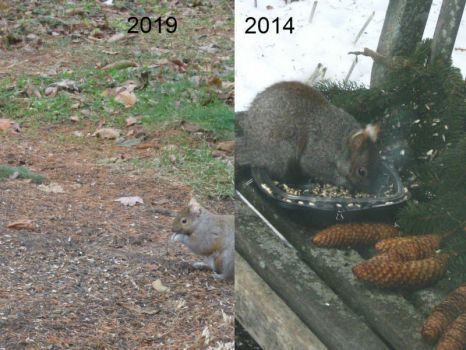 In 2014 we were seeing evidence of leucism in the gray squirrels that were coming to our feeding stations for the birds. In the 2014 photo, notice the white tuft of fur on the inside of the far ear.

This week I was able to get a photo of a gray squirrel that we have been seeing since 2014 with light colored ears. Not only are the ears light colored in this year, but notice that the "feet" have white fur near the tips as well.

We have had leucistic birds in our yard also.

Leucism means that "there is partial loss of pigmentation in an animal —which causes white, pale, or patchy coloration of the skin, hair, feathers, scales ... " from: https://en.wikipedia.org/wiki/Leucism
Created by roseheather Published 14 December 2019

Never heard of these, RH, so thank you for the info & picture. Happy New Year to You & Yours, too!

Yes Puitepe, the environment does affect humans and animals. But I don't think in this case with the leucistic birds and animals, that is the case.

i know that this can come or not, like albinism or melanism. but it is interesting, that in some areas, where that was not reported, out of the blue animals beging to react to things that do come into the environment NOT by nature. in our case it is esp. around the area where the cooling-water comes into the nearby river isar. you can not say if or if not the influence is the reason, but i do not really like the idea.....

We sure can learn a lot on this site Roseheather! :)

Yes, DivaAnn, I had never heard of this until my nephew posted a picture of a bird that was leucistic in his yard. Now I know right away how to assess the animal or bird. I've really enjoyed seeing and learning about the variations.

Very interesting. Years ago in my neighborhood I saw a white squirrel. It wasn't close enough for me to see the eyes, but I only saw it once or twice. Now that I think of it, this is very interesting. I also noticed a grackle among other grackles eating near a tree. It was black and white. I thought perhaps it was a hybrid of a grackle and a pigeon (and it could have been), but it may have also been leucistic, which at the time I never had heard of.

The condition is leucism and a search will show the many species that exhibit this trait. It is also not created by any outside factor, and has been around for a long, long time. Moby Dick, the book, mentioned this. And some mythology also refers to this.

It is no more caused by an outside factor than is albinism. Leucism only means that some pigment is missing in certain areas. An animal can even be all white and have leucism. The eyes are the clue. If the eyes are not pink or red, then the white animal does not have albinism but leucism. The eyes are dark on any animal with leucism. We have had at least two birds in our yard that were leucistic.

Yes, as I mentioned in my the information that I included with the puzzle when I first posted it, we only were seeing the white on the ears in 2014 and the following years. But the photo taken in the last week shows this gray squirrel with white on its feet or paws. It is the first with that characteristic.

how far away is the next nuklear or chemical thing? we have a nuclear sience center not so far away; nearby you find white or spottet blackbirds, sparrows and down the river trouts.....not so nice

His paws also are white.