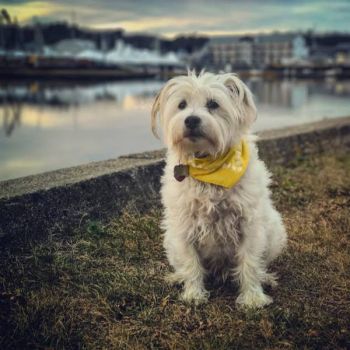 He's a rough-coated JR terrier.
Created by suemarie Published 29 January 2017
Why this advertisement?

Yes, whenever I see Phe, I think the same thing! Such good-looking pups! :-)))

looks like my Phoebe a bit-tho she always has 1 ear up and 1 down!!!

LOL! Yes, my daughter gets that quite often--people don't believe her, or tell her that she's mistaken. But it is a factual fact, not an alternative one! :-)))

this sweet pup is adorable! I'll bet he's a lot of fun!
When I saw the title Jack Russell, I thought you were playing "Alternative Facts" with us, since I've only seen the smooth coated JR terriors... so I laughed! Then I saw your note about his being a rough-coated JR... so I laughed at myself!

oh, yes, they would make a cute couple, a jigidi couple!!!!

Thanks! Yes, I've admired her before--they'd make a cute couple! And she seems to be as willing to pose as my guy is--my daughter just loves to photograph him, and he's always been willing. :-)))

Check out “Phoebe” on porcellus2.....she is a charming little Jack Russell who looks a bit like this one....she has one upstanding ear!!https://www.jigidi.com/jigsaw-puzzle/4QSEAA6D/i-am-rather-photogenic

Thanks, Suzy and Julie! We've had both pure breeds and shelter dogs (the most recent of which was a shepherd/Akita mix), and we've loved them--and they've loved us, which is the best part..... :-)))

I fold suemarie. My Schnauzer is coal black and doesn't have the little military look they're known for, but on any Schnauzer site, there they are. I learned something new today. Cheers!

You are a handsome one, Jack! Nothing like having a grand-dog! Ours is a rescue pit bull mix, and he's a sweetie.

As I wrote under the puzzle, he's a rough-coated JR, not smooth or broken-coated, and he is a pure breed. When he gets his hair cut, though, he looks just like the JR most people recognize.

He has a big black spot on his back, and some smaller ones, and his belly looks like a pinkish Dalmatian. LOL!

He looks like a West Highland white suemarie, or a cairn terrier.......Jacks are short- haired. He's plenty cute.

♥ Ours looked different, short hair and large spots. Though ours wasn't purebred. Our Hobo lived to be over 15 years. Great dog.

I love Jack Russells!! They have "big dog" attitude! That's MY kind of small dog. Thanks for sharing him, suemarie. (❛ᴗ❛)

Sue -- maybe teach your younger grandsons to bark too ;-)
I wouldn't change the sticker either.

don’t change it, just add to it!! sounds perfect as it is to me!!

Thanks--I have a sticker on my car that says "My grandchild is a dog". I put it on about 10 years ago--he's 12 now. I probably should change it, now that I have two 5 yr-old human grandsons as well..... LOL!

Thanks, Ardy! I have another picture of him posted under suemarieredux--I don't know if you know I use that profile as well. :-)))

Well, Hello. You sure are a cute one. Thanks, Sue.