You can't get a really good boil going without a great riling stir! 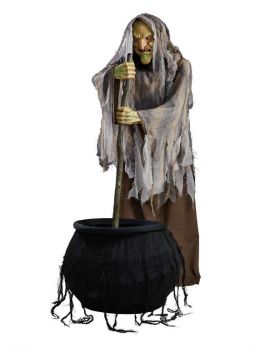 Eye of newt and toe of frog..... Shakespeare had a way with a recipe!

I often lick the paddle, I think!

I've never considered it as gender specific word. I thought it generally referred to the style of dark arts that are practiced. In this case case potions, tinctures, ointments, and other unknown creations of dubious origins.
So me by me stirring the pot I get to see who reacts the best, the worst, and you who gets to lick the paddle laden with all the swirling emotions.

Am I allowed to say that that 'witch' (is the word '' witch' Always a woman or can it also be a man meant?) is really very ugly, unwashed and could do with a new 'cover'?? or would that be rude against Ken?
I could also add that he looks evil, but that is a thing that Ken would love to hear!!

It's so nice to have all these compliments. But then maybe I haven't been stirring enough.

Sorry Ken, I need new glasses. You could be stirring up trouble. ♥

I think you need to notice the beard. It's me stirring the pot. Occasionally, I like to see what happens when emotions, thoughts, and random stupid stuff gets stirred up and and squeezed out until something screams.

What is she cooking up Ken?