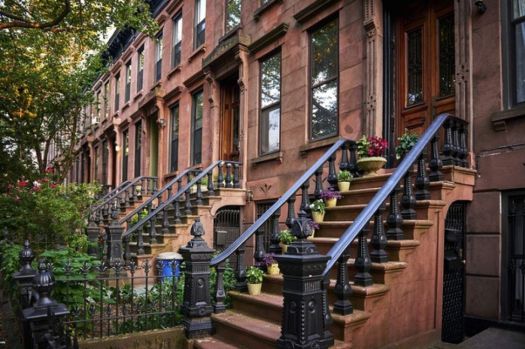 For New York City dwellers, few things evoke the dream of upward mobility quite like the brownstone townhouse. Rich chocolate-brown homes of stately design, these townhouses sit several feet above the street, atop staircases bordered by regal banisters. Elegant carvings adorn their doorway trims, acanthus leaf brackets that show plants or flowers, nature run amok. They are often very expensive, or occasionally just regular-expensive. But how did the brownstone become the favorite building material of well-off New Yorkers? Here’s a bit of NYC brownstone history for you.

Where NYC Brownstone Came From
Let’s start with a common misconception: only a small part of a brownstone townhouse or rowhouse is built of actual brownstone.

What most people call a “brownstone” is actually a townhouse built with brick, with an added veneer of brownstone. As a building material, brownstone is unreliable: it’s soft, close-grained, liable to crack and crumble. Brownstone homes give off an idea of permanence even though they’re anything but.

Brownstone is a kind of a sandstone, specifically one that dates back to the Triassic-Jurassic period. When first cut, the stone is actually pink, but deepens into its classic brown hue once it’s been exposed to the air. Like many works of art, brownstone facades often need to be restored after years of weathering and exposure.

Believe it or not, the majority of New York City’s brownstone came from the same place: the Portland Brownstone Quarry, formerly located in Portland, Connecticut. In the 19th century, when brownstone first caught on as a choice building material, the stone was cut in Connecticut, placed on barges, and hauled over to the city, where it was unloaded in stone storage yards along the Hudson and East Rivers.

Why Brownstone Became Popular in NYC
So how did we get here?

By the mid-19th century, when some of the first rowhouses were being built, Americans were pretty obsessed with the ideals of Romantic Classicism, specifically the artistic movement’s adoration of nature. The Industrial Revolution had by then ushered in a widespread streamlining of production — many new buildings were built, and fast. Romantic Classicism was a response to the pace of urbanization, a reminder that nature was not only necessary, but desirable.

Brownstone was the happy marriage of these two worlds. Steam-powered machines let laborers cut and shape brownstone faster and more cheaply than ever before, making it affordable — and its organic hues recalled the beauty and power of the wild.

For middle-class townhouse and rowhouse owners who wanted a taste of luxury, brownstone was the way to go. For little money — far less than what it might cost with limestone, granite, or marble — a homeowner could have a six-inch brownstone façade built, complete with a stoop, a rising staircase, and whatever lovely carved accoutrements they desired.

How Brownstones Came to Symbolize Wealth in NYC
So, if brownstone became popular in part because it was cheap and easy to work with, how did the material grow to symbolize wealth? And where’d those price tags come from?

This is an easy one: scarcity breeds interest.

After 300 years of use, the Portland Brownstone Quarry closed down for good in 2012. And though there are other places around the world where brownstone is quarried, experts say that there’s nothing quite like the stone that came from Portland.

But it’s not just the material that’s become scarce — it’s the style itself. There are only so many parts of New York City with genuine brownstones — the Upper West Side, Fort Greene, Park Slope, and Carroll Gardens to name a few. Since the building of new brownstones is a near impossibility given the dearth of materials, demand has exceeded supply.

Don’t Like Brownstones? Read This
If you’re in the seeming minority of New Yorkers who don’t care for brownstone homes, here are two factoids for your arsenal:

Edith Wharton, brilliant literary dame and master of the NYC upper-class takedown, lived in brownstones all her life and hated the ordinariness of the material, and the way rowhouses repeated themselves ad nauseam down every block. Indeed, Wharton said that brownstone made New York “hide-bound in its deadly uniformity of mean ugliness.”

And the kicker: the reason brownstones were built with stoops wasn’t for people-watching or sun-bathing. It was to avoid the sea of animal waste that was the 18th century New York City street. Those elegant stairs were just a way to rise above the muck.
Created by Bibliophile Published 17 January 2021

How many floors does a brownstone have?
four
A typical four-story brownstone can have as many as six fireplaces