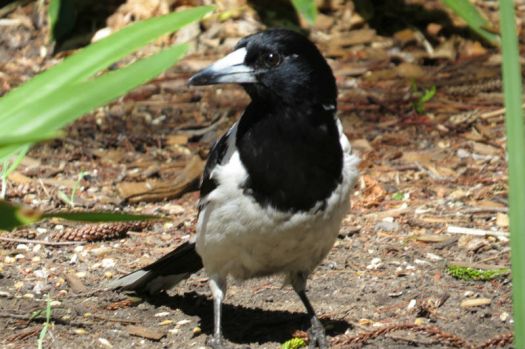 ...in the back yard. They are mainly insect-eaters but will occasionally eat small lizards.

Butcherbirds, Magpies and Currawongs are all in the same sub-family, and are native to Australia.

OOHH! That's strange, but I guess it shows ingenuity Dave! They must be real thinkers:))) Thanks!!

We have two different Shrikes that do this too. They like barbed wire for hanging and drying.

Thanks Beekay, Patti, Laura, Marian, Ank, smllpkg, Ginger, snooker, Suzy and Lyndee:))) The poor old Butcherbird is really quite a nice bird - we have never seen them doing any impaling here - so maybe ( hopefully!) we have a nice lot around our place:))))

My sister have these birds where she lives in the state of Washington. We don't, but do have the crows and the ravens.

Nicely framed with the stems/grass. I would stay away from them from what I've read here!

You got a great photo of the little devil, Rob. :)

From the comments I think we are glad we don't have these birds in WI. LOL :o))

From all the comments, I can understand how it got its name. That beak does look a little vicious.

Great shot Rob. He looks beautiful, but I'm glad we don't have them. Magpie is worse enough. ☺

I know they have to eat too, but that's nasty how they get their food by what I have read.

He looks like he has a lot of personality!

It's a handsome bird but rather glad we don't have them after reading Nev's and Ruby's comments!

Thanks Janet - yes, Magpies seem to do the most attacking here to - especially school kids on bicycles and postmen on bikes:))) but thankfully, only for a short time each Spring:)))

Hi Rob a great photo of a Butcher Bird. Around here it's usually Magpies that attack, but we never get attacked in our yard. Yes that is why they are called Butcher Birds as they hang their prey on tree. Not pleasant but they have to live too. Thanks and hugs, janet

Hi Jan - I just had a search and apparently young Pied Butcherbirds have brown feathers that slowly get replaced by black ones as they mature - both genders! O I hope that helps:))) Thanks!!

In UK, the red-backed shrike is called the butcher bird. It catches other birds and hangs them onto thorny bushes. I recall seeing them as a child, but not recently.

Beautiful bird, Rob. We get quite a few of the brown butcherbirds and we're not sure if they are young, or female, or just a different kind. Do you happen to know?

LOL!! Sorry Nev - maybe I shouldn't laugh:)))) Ours never attack us - I guess they're used to us being around!! Yes - nesting season makes them very territorial:)))) Thanks!!!

From the sound of Nev's comment I can understand the reason behind the name,...Butcherbirds!
Yikes!

Rob, they're giving us hell around here at the moment. When I went down the road to post a letter, one attacked me four times. And one drew blood on the ear of the lady next door. Must be egg-laying season, for that sort of aggression.

I agree about his name too Barb - makes you wonder who gave it to him - and why? Thanks!!

He didn't mind having his photo taken Cathy:))) LOL!! Thanks!

I hate that name but the bird is beautiful :) Black and white is pretty :)
Thank you Rob, great catch :))

LOL! It looks well-armed for sure treker:))) Thanks!!

That beak can handle a lizard with no problem! ;-)