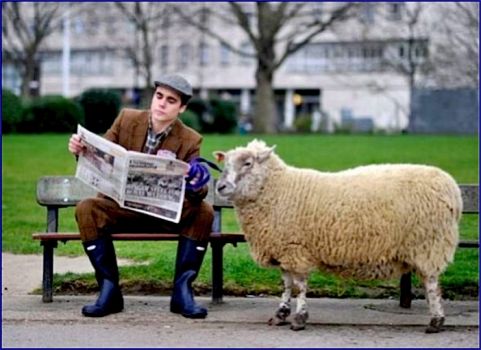 Created by JiggyBelleS Published 26 October 2012
Why this advertisement?

Tavlior - Hilarious! Thanks so much!

See...I told you sheep futures were down.

I swear that sheep is on a leash! Now that's something you don't see around here! Let's see, we have puns, we have real sheep stories and we have a poem. And that's on top of the regular captions! Some real humdingers!!

Now here's something that you seldom see..
A man with his sheep in the Park near a tree.
Searching in the ads for a house for the gents...
hopping that it has a barn and a fence!

Loved your story Trouble & Frog!
And the others as well! I'm still laughing!

Trouble - the REAL story is fantastic! LOVED it! And now I won't get it out of my mind, either!

Okay . . . I am totally at a loss here because as soon as I saw this picture it reminded me of a true story and I can't get the image out of my mind.
One night a couple of years ago I went upstairs and as I pulled the curtains too in the bedroom happened to notice that there was a a very large sheep (complete with large horns) standing patiently at the bus stop on the opposite side of the road. I thought it was a little strange as the last bus had already gone! Although we live on a country road at that time of night we get a fair amount of passing traffic (people returning home after a night out) and I didn't want it to cause an accident by running out into the road so my OH phoned the police to report it. The conversation went something like this . . .
PO:There's a what at the bus stop?
OH: A sheep.
PO: Well what's it doing there?
OH: It looks like it's waiting for a bus . . .
PO: (short silence) Err . . . who does it belong to?
OH: I have no idea . . . would you like me to go and ask it?
PO: Well if you wouldn't mind . . . it would help.
OH: (stifled laughter) You must be joking . . . it's a big bugger with dirty great horns . . .
The conversation went on for several minutes with questions regarding my OH's sobriety (he is tee-total) and state of mind before they eventually dispatched a squad car. When it arrived the sheep disappeared into a garden and hid . . . coming out again once the squad car had passed. After a couple of trips up and down the road they eventuall came banging on our door to tear strips off my OH for wasting police time at which point the errant sheeep crept back out and stood at the bus stop. There then followed probably the best half hour of entertainment that we (and by this time our neighbours) have ever seen . . . 2 police officers trying to catch and restrain a large energetic sheep. It was eventually cornered and penned in a nearby field until collected by the RSPCA (an animal welfare group)
Sorry to have rambled on . . .

"The candidates are pulling the wool over everyone's eyes," he said sheepishly.

Blodwen was not much impressed with her" hick from the sticks " date's choice of outfit. They were not going to get into Donald Ram-seys if he insisted on wearing wellingtons.

"I know I saw Little Bo Peep's ad in here some where."

I think the grassi s greener over theeere...

Look at this ad! It's sheer genius. However I don't like the way they try to ram it down your throats, you see this ad over and over; and I heard this place will fleece you if you give them a chance.

I know you don't like being a shepherd, but do you have to look at the
help-wanted ads right in front of me?

When is this humid weather going to let up? It's making my hair so poofy.

Okay, here's one in the Personal Ads: "I'm waiting just for 'ewe' "

I love the gossip column! I am 'smutton' with Brad Pitt!

Look...there's a sale on lamp chops!