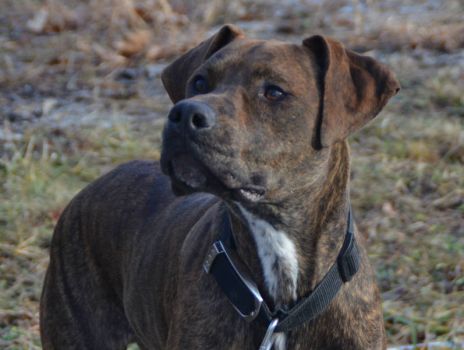 Early last January, our son's dog (and best friend) had to be put down because he had cancer.
Roo, a rescue dog, has now become part of the family. We met him for the first time this visit, as he romped and played in the fields.
Created by pumpkinhead Published 30 December 2014
Why this advertisement?

Well put, Laura! He DOES own the family!
Irresistible he is, Florrie~
He kind of grows on you, Cathy! Thank you :)

That's a great picture of a wonderful dog!!!!
Thank you Suzy.

He has his head held high...probably because he owns a family now.

Such kind words, peterpanswoman! I am going to have to send all of these comments to our son and his girlfriend! :) Thank you so much for stopping by.

Oh, eyes!!!! Such a gift to hear from you!!! A healthy and prosperous new year to you as well, my friend. Keep making those fine treats.....and maybe stop in now and then when things slow down for you. ♥

Well, thank you wolflady. :) Roo joined the family back in the spring, and they seem to be best buds!
Our son and his sweetie will take good care of him, Ank, and give him the love and attention he needs.
He was looking at our son, Willy. Waiting for him to throw his toy so he could chase it!!

Hi Suzy, I hope you had a really fine holioday time and wish you both all the very beat for the coming year. I miss seeing you, too, but I gotta keep getting the dollar. Hugs and love.

Nice looking dog...I wonder what he is looking at. He must be happy to have a good home now.

What a gorgeous dog. So glad he found such a nice forever home. Thanks for sharing..

Aw. Thanks for all the nice comments about Roo!! He received a very nice car seat cover from his human grandparents for Christmas. :)
He made me chuckle each time I took a picture - he'd turn and look with this quizzical eye.

Nice looking dog, and a good photo of him. Good angle.

Ditto what Barb said. I grew up in a house with 4 kids and a "nanny dog". She was all heart♥

Great picture of your grand dog, Suzy. I hope you'll be friends with him for a very long time.

He looks a lot like my granddog, Josie, who belongs to our son and daughter-in-law.

The suggestions of his mix sound like Josie as well. they mentioned recently that she is probably part pit bull.

He looks bright eyed and focused. I think Roo's a great color.

Wow, what a beautiful dog! And so nice he loves to obey!

He's a handsome kangaroo and I love the term grand dog!

Oddio- When they found him at the rescue shelter, he was very jumpy, like a kangaroo. Thus the name, Roo. All I know is that he loves to run and do what he is told. :)
He has made a place in their hearts already, Ginger. :) Thank you!!!
It was a treat to meet him, Ardy. We have seen pictures and "talked" to him on the phone, but this was our first face to face meeting. And yes, Roo, after kangaroo!

Looks like a butler saying, " At your service." For Edie,a roo is a rooster. Down under in Oz it'a kangaroo.Does it man anything here other than just a name? He looks lovable. Thanks, Suzy. It' nice meeting your granddog.

Know how that feels after losing Hunter but now Daisy is a sweetheart also. This one looks like a great dog too and will give years of faithful service for sure so enjoy him. TFP ♥ :O))

PH, I'm curious as to where the name comes from.

Brindle boxer, pit bull, and whatever else... A fine result, I'd say. He looks like he's ready to love and serve you folks. :>)

Brindle boxer!!! Yes!! That's what our son said, and of course, I couldn't remember it!!! Thank you riveroad. And it was a kong .Shows you what I know about dogs and their toys!

He's a mutt alright, smllpkg! :) But a real loving one!
Our first "grand dog" was a pit bull mix as well, Barb. He was the most gentle, loving and devoted pet ever; saw our son through a very long recovery from a car accident and was his best friend for 10 years. One of our Christmas gifts this year was a picture of him. Of course, I cried, our son cried....we were all snotting and sniffling....it was a very touching gift.

Pit bulls are my favorite dogs. There is no other breed as sweet and devoted as pit bulls. They are called nanny dogs as they love children and are very protective of them....Your son couldn't get himself a better dog! Congrats!

the colour comes from a brindle boxer and I'd say he has some hound in him with that snout. Handsome devil :) (the toy was probably a Kong)

Roo is certainly a very handsome mutt, wherever his genes came from!

He's a mix of a number of things, snooker, including something with an odd color (!!) and a bit of pit bull. He heard my camera clicking and didn't know whether to look at me, or at our son, who was ready to toss his chew toy.

What kind is he? Looks very alert. 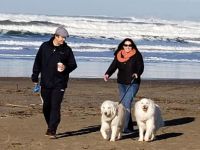 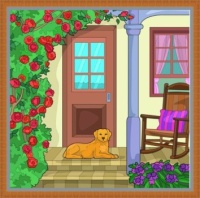