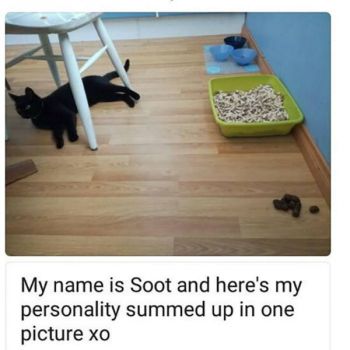 Some weird kind of litter from the look of it. :)

Thanks, ThomasCat. You put it very well. :)

Yes, I feel sorry for this little cat because its owner is not thinking very clearly. I would like to ask the owner....'Would you like to eat your dinner sitting beside the toilet....that has been used and the lid is up?'

Not bad kitty, Hjalmar, bad bad owner for not taking better of what looks like a normal cat...

Soot's way too laid back about his living conditions! His humans should be shamed. Many cats would have scooted that box across the floor and shoveled it out as a warning. ツ

Cats aren't animals, they are gods. :)

This set up is if humans would dine in the bathroom..Poor cat being treated like an animal..❤️❤️

That's filthy litter right beside his food?...no jury would ever convict him...I'm amazed that she has not got enough human shame and is posting this picture...shame, shame, shame on you!!! ...

I guess some humans are harder to train than others. :)

Trouble is that the human involved probably isn't smart enough to figure it out.

Just showing the human a better place to put the litter box. :)

Cats are so fastidious.....their litter box should never be this close to their food!