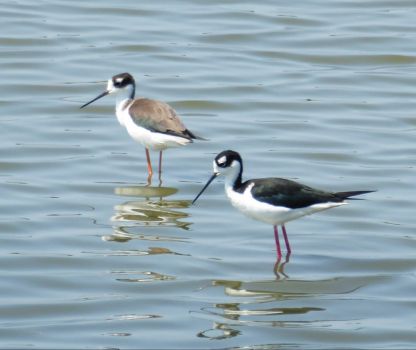 Yes. I've seen them and bookmarked them, but I haven't had time to get to them today, kbcm. ☺

jyl -- Did you see the extra puzzle I posted with two more stilts, presumably juveniles?

Yes, I have Sibley, as well. The Stokes I have is a new edition and has more pictures than previous editions. It works well in my area. I also go to Cornell's Website, especially to listen to bird calls. Sometimes, even with several books and the internet, it is difficult to pin down a bird to species. Identifying birds is a process, a fun one for me! Thanks for your input.

I've been using David Sibley's books, first "The Sibley Field Guide to Birds of Western North America," and after getting on jigidi "National Audubon Society - The Sibley Guide to Birds." Look for them first in used book stores; what I found were pristine copies at very good prices. There are a couple on-line sites, too. If you enter the "proper" name of a bird in your browser, you should end up at Cornell University's ornithological lab site--almost more than you want to know about a plethora of species along with similar-looking birds and info re behaviours, etc.
I found Stokes to be okay for what it contained, but missing lots of species common in my part of the world.
Diannepuzzle, Sibley shows them to be resident along your coast, throughout Florida and the California coast, migratory in other areas of southern US, and summer visitors farther north in North America.

Diannepuzzle, this is probably the species you saw, or possibly an American Avocet.

Saw some kind of stilts in Coastal Areas of Texas ! Nice !

I've been using The New Stokes Field Guide to Birds, Western Region. It has quite a few pictures of males, females and juveniles with good descriptions. These birds are common here, but delightful to watch, nonetheless. Hopefully, you will get to see them again. I would post my other photo tonight, but I have reached my limit of 4 puzzles!

The drawing in my field guide wasn't particularly large, so I assumed that the lighter feathers on this one were represented by the lighter feathers in the guide. The only photos I have taken myself couldn't have been very good: the first Black-necked Stilts to come to my part of the world arrived in a bog - two pairs of them - and small "herds" of birders descended on them and those of us who had cameras shot whatever we could see through the reeds and weeds. They were nesting, so no one wanted to disturb them. By the time they flew south, there were seven of them altogether, so the local birding community was quite pleased with the experience.

Thank you jyl. It could be a juvenile, although adult females also have brown backs. From what I read, juveniles have pale margins on back and wing feathers, dull pink legs and bill pinkish at the base at first. I don't think this photo is sharp enough to make a definitive call. I'll post another puzzle tomorrow of two birds that definitely look like juveniles. Thanks for prompting me to take a closer look at these birds!

Beautiful photo, kbcm!! the brown one is a juvenile, according to my field guide.