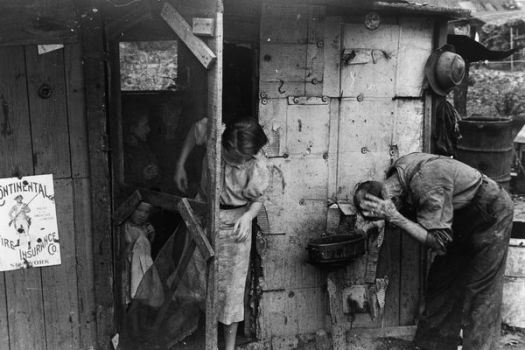 Another family in their home. They saved rainwater in barrels.
Created by Bekkabee Published 19 August 2019

Laurajane, when I was looking for pictures for this theme, I was shocked at what I saw. I knew about the Depression of course, but now I've had glimpses of how shocking and degrading it was for many. It was quite an experience for me.

Such an interesting and riveting set.

Nev, thank you for the kind words, and the benefit of your experience; I appreciate that. These puzzles weren't easy to post, and I had second thoughts, but decided to go ahead anyway. I'm not sure why -- it just seemed important.

Rebekka, a fine set of four photos, showing us the tough times of the Depression years. They were just as tough out here in Oz too, according to stories my father told me.
And don't be too despondent if you don't get a lot of Solves on your puzzles for this Theme. Most vintage photos are B/W, and I've found from experience that not a lot of people here on Jigidi want to solve black and white images - they generally ignore them and go for coloured ones. ♥♥♥

RebeccaB, your mother sounds a lot like my mother! They probably would have liked each other.
You're welcome for the photos. They weren't easy to post, but I just felt like I needed to.

My mother always said you can be poor, but there's no excuse for not being clean. (I guess they were sometimes poor, "but not THAT poor".) My G'ma also spoke of hobos who would come to the door asking for food, and she always gave some, but in later years she could never resist a salesman, saying, "At least he's trying to work, not just asking for a handout." so she'd buy all kinds of little things she had no use for, hoping if enough people did, it made a difference for him. Tough times most of us to day can't really relate to. Thanks for a good series of photos.

Hi Ank, yes it was a very sad time for millions of people. Thank you for stopping by.

@ParsonWayne -- I'm glad I was too, PW. My mother remembered it, and told me stories about hungry people who would come to her family, and her mother (my grandmother) would take them in and feed them, and somehow, they never ran out of food.

Thanks for this series.
So sad.

I'm glad I was born after the Great Depression.