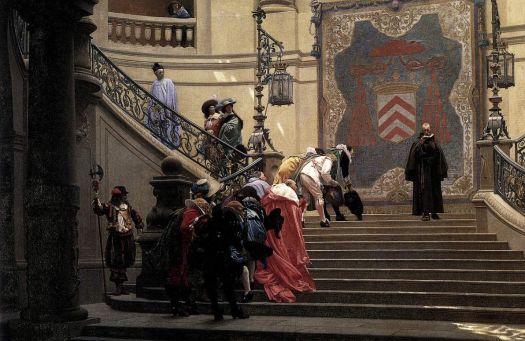 Jean-Léon Gérôme was born at Vesoul, Haute-Saône. He went to Paris in 1840 where he studied under Paul Delaroche, whom he accompanied to Italy (1843–44). He visited Florence, Rome, the Vatican and Pompeii, but he was more attracted to the world of nature.

Gerome played a part in the suppression of Impressionism, that led to a change in French law. He described Impressionist painting as “insipid and badly executed: badly drawn, badly painted, and stupid beyond expression.” He boasted that “I claim the honor of having waged war against these tendencies, and shall continue to combat them.” In 1884 he objected to a showing of the paintings of Edouard Manet at the École des Beaux Arts, and In 1897 he sought to prevent the inclusion of the works of Gustave Caillebotte in the official modern art collection at the Luxembourg Museum. At the Universal Exhibition of 1900 he is said to have tried to prevent the President of France as the latter entered the Impressionist exhibit, saying “Stop, monsieur le Président, the shame of French painting is in there.” And late in his career he unsuccessfully sought to prevent the entry of women into the École des Beaux Arts.

In the middle of the 19th century—a time of change, as Emperor Napoleon III rebuilt Paris and waged war—the Académie des Beaux-Arts dominated French art. The Académie was the preserver of traditional French painting standards of content and style. Historical subjects, religious themes, and portraits were valued; landscape and still life were not. The Académie preferred carefully finished images that looked realistic when examined closely. Paintings in this style were made up of precise brush strokes carefully blended to hide the artist's hand in the work. Colour was restrained and often toned down further by the application of a golden varnish.

The Académie had an annual, juried art show, the Salon de Paris, and artists whose work was displayed in the show won prizes, garnered commissions, and enhanced their prestige. The standards of the juries represented the values of the Académie, represented by the works of such artists as Jean-Léon Gérôme and Alexandre Cabanel.

In the early 1860s, four young painters—Claude Monet, Pierre-Auguste Renoir, Alfred Sisley, and Frédéric Bazille—met while studying under the academic artist Charles Gleyre. They discovered that they shared an interest in painting landscape and contemporary life rather than historical or mythological scenes. Following a practice that had become increasingly popular by mid-century, they often ventured into the countryside together to paint in the open air, but not for the purpose of making sketches to be developed into carefully finished works in the studio, as was the usual custom. By painting in sunlight directly from nature, and making bold use of the vivid synthetic pigments that had become available since the beginning of the century, they began to develop a lighter and brighter manner of painting that extended further the Realism of Gustave Courbet and the Barbizon school. A favourite meeting place for the artists was the Café Guerbois on Avenue de Clichy in Paris, where the discussions were often led by Édouard Manet, whom the younger artists greatly admired. They were soon joined by Camille Pissarro, Paul Cézanne, and Armand Guillaumin.

During the 1860s, the Salon jury routinely rejected about half of the works submitted by Monet and his friends in favour of works by artists faithful to the approved style. In 1863, the Salon jury rejected Manet's The Luncheon on the Grass primarily because it depicted a nude woman with two clothed men at a picnic. While the Salon jury routinely accepted nudes in historical and allegorical paintings, they condemned Manet for placing a realistic nude in a contemporary setting. The jury's severely worded rejection of Manet's painting appalled his admirers, and the unusually large number of rejected works that year perturbed many French artists.

After Emperor Napoleon III saw the rejected works of 1863, he decreed that the public be allowed to judge the work themselves, and the Salon des Refusés (Salon of the Refused) was organized. While many viewers came only to laugh, the Salon des Refusés drew attention to the existence of a new tendency in art and attracted more visitors than the regular Salon.
Created by Naughty1 Published 27 April 2021