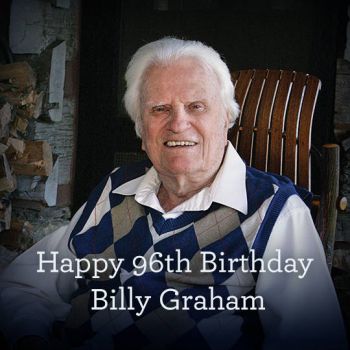 Mr. Graham will celebrate his birthday at home with family throughout the week.

“Although his physical condition keeps him homebound, he remains interested in current events and the ongoing work of the ministry that he began more than 60 years ago." —Franklin Graham
Created by DixieGal Published 24 August 2016
Why this advertisement?

Nette said she went to the library,which I have not done, but went to the Cove with the church a few years back with a bus load for the church. It was near Christmas and we were supposed to meet with Cliff Barrows but he was ill and could not make it. But he came to our church and spoke. He was a,so very real. I spoke with him and it was a funny thing to remember, besides his smile,, he had cowboy boots on

Coco, what a glorious day that was, to be escorted to heaven by her Sweetie.

I agree, coco! What a blessed day that was for your mother. Thanks for sharing this with us! God bless you!

Update: I was reviewing my completed puzzles and came upon this posted 2 years ago. Today, at age 99, Billy has passed on to be with God. His body will lie in state in the Capitol Building. As people file past to respect his deceased body, Billy will be enjoying his time in heaven face-to-face with God, knowing the greatest happiness possible.

When my mother died, she was escorted to heaven by my deceased father who appeared to her. She looked over in the corner and said, "Richard, wait for me!" and then died. Just imagine the hundreds of thousands of saved believers, along with his wife, Ruth, who met Billy as he moved into Everlasting Life.

Thank you for your comment, glorya. Have a blessed day!

Billy Graham was so much a part of my life and I never missed a sermon if I could help it. My two son's were raised to be part of his life. My middle son has his birthday. Thank you and God bless any one who would listen or follow his words.

You're welcome, Mary! Yes, he was used by God, and a mighty influence on, probably millions, of people! Thanks for stopping by! God bless you today!

Was at the Crusade I Houston, Texas early 1960's. Then 2 years ago visited tThe Cove with my church., What an experience, both of them. I was there at Christmas time. We to were suppose to see Cliff Barrows, but he was not able to be there. He had been at my church in Chattanooga years ago. You brought back special memories of very special man, mightily used by God. Thanks for sharing. Mary

Thanks, Dottie. he is one of my favorite people. He has led so many people into spiritual happiness and into God's hands. Haney :-)

Thank you Coco and OandA for sharing this with us. What a blessing you two are! I, too, am not sure this would be allowed today. And if not, what a shame!

Coco, I went to a Christian nursing school and our school choir used to go to churches to sing. We went up to Great Lakes Navy Base and sang with the Navy choir. Sang Christian songs. That was back in 1970. I don't know if they would do that today.

In 1962, we were counselors at the El Paso Billy Graham Crusade. Every evening we traveled there on a bus full of Airmen and dependents which was sent from Holloman Air Force Base in Alamogordo. It was late in the year, so we sang Christmas carols on the way. It was a pleasure to participate. I wonder if the Air Force would support that today?

Thank you, nette and bayhome! God bless you! :)

wow . . . I can remember listing to "the hour of decision" on my radio over the AFN (American Forces Network) when I was nine or ten years old! What an influence this man has had over so many souls!!
God Bless You - real good - Mr. Graham ♥

I believe Brother Graham echoes the statement of Paul; "If you think you should emulate me, emulate God, because that's what I'm doing."

Thank you everyone for your comments. He is a wonderful man and many lives were changed forever because of him. God bless you Mr. Graham!

He's been a part of my entire life.

Visited the Billy Graham Library in Charlotte, NC last spring....... wonderful experience...... would recommend it to all...... most remarkable man! :o)