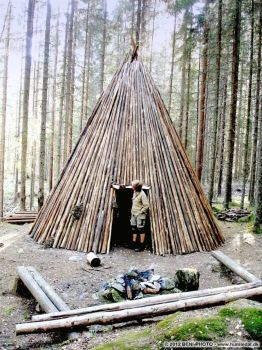 Created by hanne9 Published 1 November 2012
Why this advertisement?

I just happened to think about the fact that in the very beginning they didn't think "I want to build me a house". When you think about what they needed it was shelter for rain, snow, cold etc., and then they had to experiment. Just imagine what these very basic needs have developed into today!!

One thing is absolutely certain, Ank, they have worked not just hard but ultimately hard!! Today we would never ever be able to do just half of what they did to cultivate a place for them and their families. They were poor people from Finland and Sweden who went out into the wilderness to try their good - or bad - fate. I think that these poor and very, very modest people learned from the Samis how to do things in a smart way. Remember there were Samis all over North Scandinavia from the Atlantic Ocean till way into Russia. Thanks so very much Ank!!

Whizbang, yes, if you read the comment I just wrote for Ank, you will see what it is about. The Samis were the "masters", used to life in the wilderness, the newcomers had a million things to learn and they did it or died. Thanks so very much!!

But isn't it fantastic that a form is so practical that so many invent it apart from each other? On the prairie they didn't have the great amount of wood, so they had to use skins. The Samis did so too when they moved around and didn't stay very long at one place. It was much easier to pack! And it's SO funny, when you visit some of the old settlements the skeletons still stand there ready to be put skin on!! Thanks so very much Ardy!!

Hanne, These are similar in design to the Native American dwelling, tepees. They had a pole structure but covered them with animal skins. They also had the center hole for smoke to escape. You bring us such interesting pictures and information. I know you were one of the really good teachers in your students' lives.

hanne, found your answer under your other photo. From the Samis (laplanders?) of northern Sweden. Can almost see the reindeer!

Hanne, this is so interesting. What part of the US (or what country) are these from? No info on google! Thank you.

Great. And indeed that trees are perfect, it makes the work much more easy.
I think this were very sensible people and hard workers.

It's exactly the point!! There were lots and lots of trees that were fit for this kind of building, it was just to cut them and put them together, then they could seal it afterwards when they had time. Thanks so very much Sandy!!

Wow, interesting Hanne. The wood is so straight which is wonderful for making these perfectly shaped houses. Thanks Hanne.

When pioneers moved into the wilderness to civilize it and make it into farm ground, they had no time for building a real house as the work in the wood was the most important. But somehow they needed a place to live through the year, and the most usual way to make it fast was this kåte type. It was easy to make and when you lit a fire it became warm and nice inside. Besides they were not used to any king of luxury, food on the table was the most important. They very often lived in a thing like this for more than 10 years until the harvest, the cattle etc. were the way they wanted them to be. Then they started making a real house.