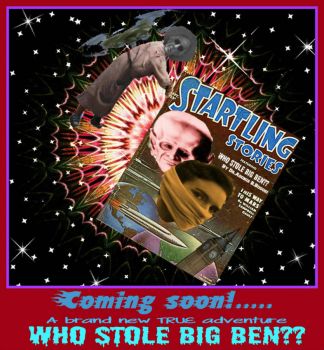 Yes, coming soon (or not so soon, as the case may, or may not, be)........an all-true, all-revealing, Bugosi adventure, as we search for the criminal mastermind behind the disappearance of....BIG BEN!!
Created by lelabugosi Published 2 March 2014
Why this advertisement?

I'm going to try that again GGL, I forgot about that. If I really like it I won't have much to do with the micro again except warm my tea and coffee!

When the mastermind behind the thievery is found, perhaps June you could loan him your oxygen machine and set him up in front of a nice campfire. Kaboom!! Bye bye Baddy :~)))

juneeee...you need a hot air popper that actually will melt the butter on top while popping...or if you wanted LOTS of butter you could still microwave it while the corn is popping...easy on the salt though...and keep an eye out for Wicca!

Oh dear GGLady, I would be the one to go pop leaning over a good hot flame with my oxygen machine on, so back to the microwave

Nope...have to agree with the purple marsupial....start from scratch with kernels in a pan with a little oil and butter over a good, hot flame and enjoy listening to the kernels pop open....then cover with more butter and salt and lean back and enjoy.........microwaving is for sissies..........

I only buy Orville's and Squire is right, it still tastes really good!!

Now I'm going to pop some real popcorn and slather it with real butter and real salt, and nothing else.

Well, as Mr.Squirt is altogether devoid of most things, I don't suppose it really comes as a surprise that he is also devoid of any sense of smell......
....and CLUES will be forthcoming, in due course.......when they choose to arrive.......

If the smell of microwave popcorn doesn't overcome you with nausea, you are probably altogether devoid of any sense of smell.

Wouldn't that be nice? My bike basket brimming over with hot, tasty popcorn...yum!

well get on your bike and bring me some over

...if there are no CLUES forthcoming!

30 years ago or more there was this guy who called himself Orville Redenbacher, a goofy looking old man with a red bow tie and red suspenders, who came on the TV advertising "his" popcorn. Turned out he really was Orville Redenbacher, and he hit the microwave popcorn market at just the right time, with delicious popcorn and the rest, as they say is history. I'm still eating it! I'll be having some in a few minutes!

too late spricey I still remember how yummy it was and is no more. I blame these big screen cinemas full of screaming kids who are full of E's and will eat any old rubbish

and the gherkin and the Shard, take them all off to Dubai where they like that kind of stuff

I hope they take that big wheel thingy next. I don't like it, it looks like it should be in a Theme Park not in London.

Me too, please!! Wonder what the next thingy disappearing will be? Look for somebody with a huuuge backyard!!

Hmm lelabugosi mentioned that Big Ben was one among others of landmarks to be disappearing? Has anyone checked on the Eiffel Tower, Statue of Liberty, Taj Mahal etc.
Pass the popcorn please Robbie (I have to get some before June realises how yummy it is)

think I will invest in a popcorn machine, the stuff we now get in England is mostly white and fluffy. How I wish these people would just charge more and leave the product alone. Of course we wouldn't buy so much then but I had two kinds last week and they were just dreadful, so I won't be buying any more

I wholeheartedly agree Squire and June.........please pass the tamales!..... So JC has the inside scoop but no clues...........I guess that leaves us clueless..........that bell could never fit in my dinghy so I know I can enjoy the adventure with lots of buttery, salty popcorn and a clear conscience!

Mr Squire if jigidi goes 'poof' then so do I as I would have absolutely nothing to fill my days in with. That goes for a lot of people, so you do have a point that for £1 per month you help to keep lots of people alive

Yes, psquirt....there is trouble afoot and we are here, poised to investigate this heinous crime....magnifying glasses in hand.....and where is lelabugosi??...as the policemen said when their toilet was stolen, "we have nothing to go on!".....

WELL! I knew this was BIG, but I didn't appreciate the total CHAOS, the rampant social DISLOCATION, the utter DISORDER that was CRIPPLING London! Yes, please, please! Details! Clues!

I am just back on Canadian soil having spent a number of days in London and....there is great consternation in that city because of the SILENCE....there is no bong, bong, bong of Big Ben.....the Tube has stopped running....cars are smashing into each other....the Queen does not remember where she put her crown...chaos....what has happened??...are clues forthcoming???

I don't care what we celebrate as long as there is tadpole wine and the Robster's tamales...........

You know Robster, I agree with you completely (and I thought you were speaking generally, not ragging on Juneee). Although from time to time I post a passionate appeal for Bugosilanders and other Jigidiers to become All-Stars by buying themselves a star, that is only an expression of support for Jigidi. Jigidi needs to stay profitable, or Jigidi goes *POOF* and so do our puzzles! But I agree with you wholeheartedly that it's everybody's personal choice and all non-star solvers are welcome, both here in Bonga-Bonga and everywhere else. IMHO. So let's have a jerk-pork tamale!

Hee hee, I think OM is very happy in her new warm abode!! Pleasant dreams June!
Squire it was brought to my attention (by Jenny) that my tirade on saturday could have been delivered in a more friendly and general manner rather than a direct attack on you! Of course I stand behind everything I said, that has not changed but I did not in any way mean it as a direct statement against you! Reading it back several times I can see where Jenny and others may think that way. SO PLEASE ACCEPT MY SINCERE APOLOGIES and perhaps partake in a Robster tamale??!!

Patsquire, it's funny, as you might know I sometimes have to look twice at English sentences before I get them right! I just read yours here with a lack of an apostrophe in spring's! It gives quite another meaning...... but beautiful too, like yours - even if it's not meant to be SO beautiful at all....

why are you picking on your lovely ex? Do you have a plan to do a copy cat theft. you can't go around stealing Octomoms anyway, she has responsibilities. I'm away to my bed before things get a bit closer to home.

Now, when we're talking about "...many dastardly disappearances" would that also, maybe, perhaps include THE KIDNAPPING OF OCTOMOM?????

I just hope all the disappearances are in the London area, nothing would surprise me down there

I have to say, that the purloining of Big Ben (the WHOLE tower-thingy) is only ONE of the many dastardly disappearances which have been taking place over the past few days..........
All will be revealed......in due time......sometime.....

My clothes, my chair, the very floor around me . . . . . . are soaked, dripping wet, pooling with the sweat of relief! Oh, the weight which is lifted from my shoulders! Thank you lelabug, thank you for your unusual, indeed atypical act of kindness, exculpating me right away, so I don't have to worry my little head about this caper! Whew! Oh joy! Oh rapture! Oh Robster's tamales!

I think you're thinking about (have thinked, thunk about???) Ben Nevis, juneeeee...although that sounds more Old Testament than Scottish, doesn't it?

Did they lift off the top of the Elizabeth Tower to steal Big Ben...and how did they ever move it without the clapper donging? Just asking...

Big who? Is he Scottish?

Will we never hear Big Ben again? Will we never see the time of it's clock? Who would dare pilfer such an icon? A dastardly deed it is!! Mister Bugosi you must work closely with Scotland Yard to get it back.

Alas, good and pure spirit Spricey, friend of the downtrodden, 'tis true but on my honor I cannot divulge a single fact or even a hint about any of my clients. No kiss 'n tell. You either live by the code or you don't.

Oh patsquire. No fear for you surely. I see you have your phone number with your avatar. So...no doubt you are inundated with calls from lovely, luscious, ladies with lewd longings, keeping you company. Wouldn't one of them be able to provide you with an alibi?? ;~)

Good point, Heidi! I'd mostly forgotten about the outrage to our beloved Mount Rushmore, and now that you've reminded me I'll be more sympathetic to the feelings of Britainians when the word spreads that...Big...Ben...IS...GONE!

As long as those screwy Bugosis deface British property instead of American property (like Mount Rushmore), I'm perfectly happy. Go on, lela..... replace Big Ben with the D.O.L.L.S. House. See if I care.

I knoweth knot howeth lelabug doth it, but somehow he taps directly into my very psyche! For most of my life, many many decades I've had this peculiar recurring dream:

I am stealing something enormous, immense, huge beyond huge. From the center of a major city. Using lots and lots of helicopters with long cables. Whatever I am stealing CANNOT BE STOLEN and it most certainly cannot be lifted by ANY NUMBER of the strongest, most powerful helicopters in the world.

And now lelabug has tapped into my psyche, delved into my mind, plumbed the depths of my brain, and concocted THE PERFECT CRIME TO PIN ON ME because I have NO DEFENSE. I have NO ALIBI. The boys in Chicago can do me NO GOOD.

Oh, woe is me. I face prison, prison until the end of my days. Not because I DID IT, but because I'VE DREAMED IT ALL MY LIFE!

Of course, Varda, the butler!! The butler - again-again!! What a lot of space there must be above London!! I think the flying traffic is happy!!!

My money's on SLOG. Big Ben would really enhance her impressive abode. Or else the butler did it.

you could trust my goat to find that for you. Have fun playmates, 'tis up the wooden hill for me.

Sooooo!...I guess to solve the mystery one only has to look for the "butt of a joke"....

Actually GGL Big Ben is the bell and not the clock (which I only found out last year on jigidi!)....... I think JM might be right!!.....No I like June's version better!

looks like a phallic symbol to me, but then what's new? Reminds me of that family thingy Lost in Space with the Earth Family Robinson and Mr Smith

I heard that Big Ben was a Space ship, and it just took off.

Well...I was going to ask if "Big Ben" was another of the Bugosi Ménage or the famous Clock located at the north end of Westminster Palace.....Obviously, from your comment below, it's the Clock...for even the Bugosi's do not qualify as "landmarks".....yet!

Wait till we reveal the mastermind behind the disappearance of landmarks from around the world!.....(hee-hee!).......

Oh goody, is that the strapping big lad who fell from a tower?! This sounds like a "ringing" big story, cannot wait!