Cheeseburger at the Vienna Inn 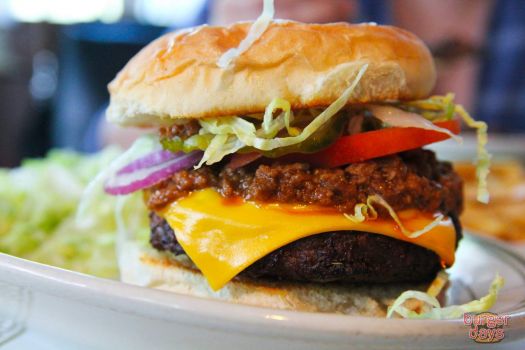 From the Burger Days blog: "A Never-Ending Quest to Find the Best Burgers in D.C., MD & VA."

The title of this restaurant review is "Crush the Chili Dogs, Beware the Burger at Vienna Inn."

"You know on "Diner's Drive-ins and Dives" where Guy Fieri walks into a "funky" little dive bar and discovers the place is doing it up gourmet style, with shit like duck confit or scratch made Beef Wellington? You know how there's always some talented young chef, usually covered in tattoos, who's decided to eschew the world of fine dining, and instead infuse his years of culinary learning with the comfort food he grew up eating?

It's punk rock gourmet. Rock and roll on a plate.
...
Opened in 1960, the Vienna Inn is a dive in every sense of the word. It's a watering hole where people can escape the pressures of their daily 9-to-5 grind. It's a place where blue collar and white collar can sit back, knock back a beer (or three), and argue over whether or not the Redskins will ever make it back into the playoffs. It's a place where the decor hasn't changed in the past 30 years, and neither has the clientele. Quaint, greasy, comfortable-- there are many words to describe the Vienna Inn, but gourmet? No sir!"
Created by Mischka Published 18 June 2020

@Remysmom, thank you for correcting me! Shall I delete it?

Hard to turn down a burger puzzle.

I don't think my opinion of Gordon Ramsay would be welcome on this site, so I will keep it to myself. heh heh!

This burger looks super. Must be the VA joint! :-)

Nice story, but this Vienna Inn is in Vienna, Virginia

Here's a scathing Reality TV review. I wanted to find which town the Vienna Inn is in. I know it's long, but found it hilarious.

Vienna Inn is an Austrian themed hotel owned and run by a dysfunctional couple, Jonathon and Lisa Krach.

The couple bought the Inn in 2000 but there are rumours that the Inn is a brothel and they are swingers!

Gordon arrives and is surprised to find that the staff buy their own costumes at around $300 a piece.

Lisa admits that buying the hotel was her husbands idea and she was against it as they had two young children, he is half Austrian/Polish and cooks in the kitchen.

Gordon is taken up to his room and is served a boar appetiser that is under seasoned and has soggy bread.

The bedroom is dated and has a locked closet that is for Lisa as she has no room for clothes in her own bedroom, which is connected to Gordon's room.

Gordon sits down to order food from the German menu, he orders the scallops, beer battered sauerkraut and vegetarian mushroom ravioli.

The Scallops were cut up, rancid and terrible, the sauerkraut is dated and the Mushroom crepes are a mess but the edible flower is delicious.

He advises them to close as Jonathon's heart clearly isn't in it and Lisa's head is in the clouds.

Gordon has heard that the basement of the Inn is used for wild swinger parties, he finds a wine cellar stocked with expensive wine and a mineral spa.

Gordon arrives to see an evening service, food sits on the top as their timings are off and they are serving two day old chicken.

Gordon inspects the kitchen and finds that there is food stored in the fridge that shouldn't be together and some that needs to be thrown out.

Gordon walks off leaving an argument outside and Lisa heads straight into the bar for a drink.

Gordon tells them that he has never met a couple so undeserving of his help, he tells them to pack a bag and get out of the hotel for the night.

Gordon calls a staff meeting and discovers there are rude text messages, the pay cheques are refused by their banks and they are drip fed cash.

Gordon brings in ex customer for feedback, one had raw scallops and find it overwhelming with the clutter.

The uniforms were seen as revealing and unnecessary. They have all heard that it is a swingers hang out and as the spa and massage rooms have been misconstrued.

Gordon brings in a sommelier to help them sell wine, there are makeovers in the rooms and dining room, new uniforms and a new system so that customers can book online.

Lisa starts to make comments and Jonathon gets lost in the kitchen. The service has fallen apart and food is coming out at different times.

Gordon asks them to be honest if there is anything they don't like and Lisa tells him she is surprised how he only did one room.

Gordon tells them this isn't a makeover show and the rest of the work is for them.

He also tells them that he arranged for a new stove to be installed and the engineer came but had to leave as it is on the verge of running illegally.

What Happened Next at Vienna Inn?

Shortly after Gordon left Lisa and Jonathon reverted straight back to the old Vienna, they changed the decor and took all of the clutter back out of storage.

They went back to the old menu and as a result their reputation has remained the same.

Vienna Inn closed in November 2017 as the hotel suffered from a fire that caused around $75,000 of damage.

Yes, the reviewer is quite the hipster. :-)