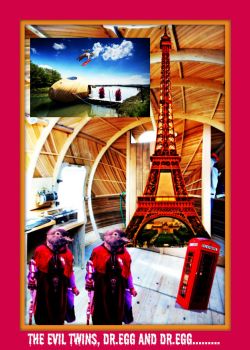 I can now reveal the identity of the mysterious mavericks behind the disappearance of national monuments from around the world.......None other than the evil twins, Dr.Egg and Dr.Egg, from the planet Egg-Nog!....
Sweetlittleoldgranny discovered their not-very-secret base in Rebmuda, where they had stashed their hoard of miniaturised monuments, re-naming the island "Eggmuda".......
As part of their devilish scheme, they had hypnotised "Roundy Robbiel" to do their bidding, and that is who our security agents spotted in the act of carrying away my head......
In the inset, SLOG (carrying the customary red herring) can be seen flying over the Evil Twins' spaceship, known as "the Egg-O-Sphere"........
We have now sent a crack team of nuns from the Our Lady Of The Tadpole convent, to put an end to
this mayhem and rescue Kaleidoboy and UncleRoger......
Created by lelabugosi Published 27 March 2014

This is just too juicy to pass up. As we always say:

WHEN GUNS ARE OUTLAWED ONLY OUTLAWS WILL HAVE GUNS!

We now return you to regular Bugosiland programming. No further sermonettes will air.

same here, criminals and police have guns, we just get caught in the crossfire

I am rowing my dinghy to see my mate Mogens in Denmark, but got lost and ended up in the Pacific. I saw some nuns in a boat arguing and rowed over to see if I could help but they all brandished tommy guns and I took off fast!! I pity any pirates who try to commandeer their boat!! Don't worry about those nuns!.........I like guns but cannot have any, only the criminals have them here!!

Sorry petgoddess, this is Bugosiland and everyone gets to say anything we want. You just happened to press one of my oldest buttons. It seems like all my life (but really only since high school) I've been arguing with people who say, I don't like guns so nobody can have one. And they mean it! Let's see, high school........graduated in '64........why that's only 50 years ago! Dat's a lotta arguments! And for almost that long I've been teaching firearms safety to young and old. I wouldn't want the nuns to get hurt either!

Yesssss!...Just as planned. Roger stomped out the fire and is now trying to scrape his shoes. He's yelling something at me. What does f#@$% b*)(# mean? Oh,well......Toodle Poop Roger!

Latest news:-
There has been a mutiny aboard the nuns rescue-boat-thingy!......Half of them have jumped ship, swimming back to Hawaii......This mission could take some time..........

on another level, I agree with Heidi let them have the stuff. Apart from being phallic symbols, what use are Big Ben towery thingy and the Eiffel Tower. I just want the boy back safely

Hee hee....I left my dirty diaper on Roger's doorstep, lit it on fire, rang the doorbell and flew up to a tree top to watch the results.

On the other hand, Plummy's "Nuns with buns: good." sounds pretty interesting! I'll have to consult with my favorite religious advisor Church Lady on that one!

There must be something out there he can sell to somebody out there and be occupied that way!! - and get a life......

Why not let the Doctors Egg keep the monuments and Slimy Roger? We don't really need any of them, do we? We can use the open real estate to plant trees in to produce more oxygen for us to breathe. Roger has no use.

Not sure.......I remember the nuns were searching for the missing sisters, (when Also was accused of attempting to kill Mr.Squirtz) and Also's yard of inflatables was trashed...........

Hmmmm.....nuns with guns in a boat in the Pacific .....isn't this somewhat like what happened to the Gawldarn sisters when they went a-missing?.....

RogerandRoger.......I sometimes think the world is one big red herring - I am in a continuous state of confusion.......
The latest news is that the nuns have left Hawaii and are now rowing, somewhere in the Pacific Ocean......trouble is that I don't know whether they are in a boat, or have fallen out - with each other, or fallen out of a boat......if they were in a boat, that is......

speaking of 'Roger', what ever happened to Rogers? He popped in, we [well most of us] welcomed him and poof! Hope he was confused with the Roger in this caper. I am not sure now what is going on anymore.... i'll pop back and see if any new developments but for now it's dinner time.

And you know, just perhaps, maybe, that Egg-O-Spere...once all the monuments are removed...just might, possibly, perhaps, make a marvellous travelling rumpus room for Bugosilanders! We could refit the interior and have our parties anywhere on the planet we choose to visit! Looks like there's plenty of storage for the Tadpole wine and Bubba could have his dream kitchen...and...and...we just have to get rid of Slimy Roger!!! Perhaps the nuns with guns could have three casualties when they finally arrive. Sister Ineeda could always say she closed the wrong eye!

Sorry, wicca, that's your mum's job...she's the one with the diapers. Guess you'll just have to be a pedestrian 'til she's located.

Not to worry Robbies Mom, it's Magpies that a singly for sorrow

No "Roger over" here - let him stay where he is!! He'll find something slimy to sell in space.....

Thanks for the chuckles. :)

It sounds to me as though Eggmuda is one giant aviary!.......And it would seem that Wicca is wearing her flying suit - they probably don't have curtains there, anyway...........

No Wicca droppings here PD, although I saw her flying earlier looking for the "Egg-O-Sphere"!! Hope she drops a "bomb!" My mom saw her too, I was getting her breakfast........mom said "Oh no Rob, one black crow means sorrow!".........I'll tell her it was Wicca and life will be good!
Sir WB, those droppings were from the 30,000 feral chickens we now have around the island! Let me know when you are flying over the house, I don't want dad to shoot you with his bow and arrows!

Were any of the droppings on curtains? Could Wicca have had a hand/wing in this? I refuse to believe it, so I won't.

Hellooee there, Squirty, old bean!...WAKEY, WAKEY!!.....
I have observed the eggy-thingy from the air, (i was with SLOG - dropping red herrings on the blighters) and believe it to be far bigger on the inside than at first appears.......As far as I know, there are only two Dr.Eggs, but eggmuda is absolutely covered in droppings, so they are certainly not house-trained!......

thanks a lot squire!!! you got me yawning now! and I DID have a nap today. hee hee

Thanks ggl and gem. I just happened to have devilled egg sandwiches with HELLMAN"S REAL MAYO today!!!
Uncle Roger has an arrow up his farting tackle!! Hee hee hee!1
I am looking forward to entertaining the team of nuns Lela, I have plenty of swizzles ready!
Funny but I dreamt of Egg-Nog the other night........I thought it was due to the full moon!

And once again, I agree with psquirt (I think I have the "vapours")! Please quit the the run-on sentences. The period should be after "and rescue Kaleidoboy." Please tell the nuns with guns to leave old Slime Bucket with the rest of the slime...we'll whip him up into devilled egg sandwiches!!!

Another prime example of Deviled Eggs........Robbie, have another glass of tadpole wine and, soon, you will be your robust and jolly self once more............

Seems we are left with egg on our faces because the Eggs got in our faces with their crime spree!!
Thank God the mystery has been solved!!!

We cannot close the book until the case is closed, and to close the case we must open the Egg-O-Sphere.....in which case our loved ones will be free, and the book, the case, and the Egg-O-Sphere can all be closed.......we are closing in on the evil Eggs, and are now close to closure.......

Can we close the book now on "The Great Monument Caper"?

(I knew the Robster couldn't have anything to do with these haynus crimes. Well, he did. But I knew he didn't, although he actually did, but not really, well yes really, I mean.....you know what I mean.)

I knew it all along. A couple of dirty birds have been behind this all along. All along I suspected the "hands" of birdie dirds, were behind it. When? All along!

Lelabug, you should avoid sentences that run on too long........such as that last one, which should END at "and rescue Kaleidoboy." Just Kaleidoboy. No need to run the sentence on so long that it includes the slimy UncleRoger!

Will the nuns crack the big egg?
Will there be an omelet?