I could eat there. 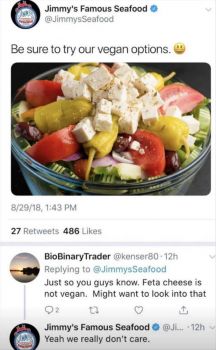 My family, when I was growing up, used to quote this all the time:

Igor: Could be worse.

Igor: Could be raining.

Oh, goody. I loved it too. Here's a 1:15 clip in which characters on Seinfeld say "Marisa Tomei" 26 times between two episodes.

I can see him and I can hear him!!! Loved Seinfeld!

From Seinfeld episode "The Cadillac (Part 1)":

ELAINE: Ah, you don't have to tell me.

ELAINE: Oh, you know what? He got engaged.

KATY: Oh, you did? (disappointed) Oh.

GEORGE: What? Is that bad?

KATY: I actually would've set you up with a friend of mine.

KATY: You'd be perfect for her. She loves quirky, funny guys.

GEORGE: You're friends with Marisa Tomei?

GEORGE: (getting excited) That's, that's incredible. My Cousin Vinny, I love her, she was fantastic!

GEORGE: (more excitement) You were gonna fix me up with her?

GEORGE: (fever pitch) Marisa Tomei's sitting home, Elaine! Why didn't you tell me that Katy was friends with Marisa Tomei?!

ELAINE: (deadpan) Oh, I don't know what I was thinking.


George gets to meet Marisa in Part 2, and, of course, gets in trouble.

I could go for some Younger Vinny.

I prefer my Frankenstein to have an internal temperature of 165 degrees... is that considered 'hot?

My Cousin Frankenstein is Hot, is a classic that one never tires of.

Both very good movies, but while I love them, I don't LOVE them.

What about Young Frankenstein and Some Like It Hot?

I think if I could watch only one movie for the rest of my life, this would be it.

I need to watch it again.

In the first hotel room.

I don’t remember this from the movie.

Vinny: Is that a drip I hear?
Mona Lisa: Yeah.
Vinny: Weren't you the last one to use the bathroom?
Mona Lisa: So?
Vinny: Well, did you use the faucet?
Mona Lisa: Yeah.
Vinny: Why didn't you turn it off?
Mona Lisa: I did turn it off.
Vinny: Well, if you turned it off, why am I listening to it?
Mona Lisa: Did it ever occur to you that it could be turned off and drip at the same time?
Vinny: No, because if you turned it off, it wouldn't drip.
Mona Lisa: Maybe it's broken.
Vinny: Is that what you're saying? It's broken?
Mona Lisa: Yeah, that's it; it's broken.
Vinny: You sure?
Mona Lisa: I'm positive.
Vinny: Maybe you didn't twist it hard enough.
Mona Lisa: I twisted it just right.
Vinny: How can you be so sure?
Mona Lisa: If you will look in the manual, you will see that this particular model faucet requires a range of 10-16 foot pounds of torque. I routinely twist the maximum allowable torquage.
Vinny: How can you be sure you used 16 foot pounds of torque?
Mona Lisa: Because I used a Craftsman model 1019 Laboratory edition, signature series torque wrench. The kind used by Cal Tech High Energy physicists, and NASA engineers.
Vinny: In that case, how can you be sure that's accurate?
Mona Lisa: Because a split second before the torque wrench was applied to the faucet handle, it had been calibrated by top members of the state and federal Departments of Weights and Measures, to be dead-on balls accurate. Here's the certificate of validation.
Vinny: "Dead-on balls accurate"?
Mona Lisa: It's an industry term.
Vinny: I guess the fucking thing is broken.

In fact, as Ms. Vito said, it is "dead-on balls accurate."

Mischka, does it fit?

I have a cowgirl hat, which I look adorable in.

I read in the tabloids that Marisa has a tomei... I hope it is benign

I do have some elevator lifts in a pair of cowboy boots I own. They are a bit difficult to walk in when taken to the top floor, but I can stand nearly 5 full feet tall!

Marisa is great. She often comes over just to tell me her troubles.

Marisa Tomei rocks! And why would Marisa Tomei hang around with a 64" Pesci when there is a 75" TIM available? (we're talkin' height here Hoff... something a sloth is unfamiliar with)

Trotter: Alright, alright. Now, Miss Vito, being an expert on general automotive knowledge, can you tell me what would be the correct ignition timing be on a 1955 Bellaire Chevrolet with a 327 cubic engine and a 4-barrel carburetor.

Ms. Vito: It's a bullshit question.

Trotter: Does that mean that you can't answer it?

Ms. Vito: It's a bullshit question. It's impossible to answer.

Trotter: It's impossible because you don't know the answer!

Ms. Vito: Nobody could answer that question!

Trotter: Your Honor, I move to disqualify Miss Vito as a expert witness.

Judge Haller: Can you answer the question?

Ms. Vito: No. It is a trick question.

Judge Haller: Why is it a trick question?

Vincent Gambini: [to his clients] Watch this.

Were they chrome release muffler bearings?

Mischka, Being a past automobile historian, I can tell you the best time for a '71 Nova was '71 and early '72. After early '72 they started getting old and started depreciating. If you really want to test Hoff's automobile knowledge, ask him what the proper torque is for the muffler bearings (on Nova with headers and a tuned exhaust) or which worked best in a Nova catalitic converter... a tabby, a Persian or a Siamese.

Now, uh, Mr. Hoff, being an expert on general automotive knowledge, can you tell me... what would the correct ignition timing be on a 1971 Chevrolet Nova, with a 350 cubic-inch engine and a four-barrel carburetor?

Mine was a two door with so many miles the key slot was worn out. Got stolen while I was shopping with a friend at the mall. We had to hitchhike home.

I was a Novan as well. Also many other things (as many of you know).

Only if that makes me a Novan.

hmmm... I'm not totally sure the cheeks from a Puffer fish or the suckers off of a recently dismembered octopus is considered vegan.

I think it is great!