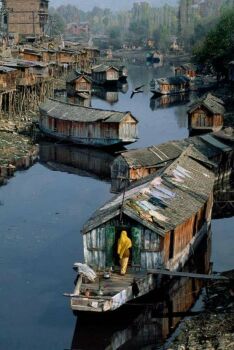 Created by starlord Published 24 January 2022
Why this advertisement?

And things won't change. Like I said, birth control has to be done instantly. But like you said, every child brings in money (even very little money) and they do support the parents when they're old.
But the main thing is: born poor, die poor. Born rich, die rich...
It's a deep pit they cannot climb out of

Tell me about it! The poor are the ones who have ever so many children in order to support the parents in their old age. Their over population is causing a lot of the world's problems. One sixth of India's population lives in other countries. They just spill over their borders. The American Peace Corps do much to help India sort out their world felt issues, as does World Vision (Australian).

There must surely be nice parts, Joan. And there are filthy rich people too. But the majority is ever so poor

Kashmir is actually a very rich and beautiful part of india. I stayed on a flash houseboat, not one of these, and was caught there for 30 days during the Banglasdesh war in 1971. I eventually escaped, but with dysentery. They are lovely people.

Yes, that is a big problem in India.

I'm not the one to tell them what to do, but it will not be solved till there is birth control, bir

Sad that while there is so much global wealth, there is still so much poverty

Can it get worse, rjh? Of course it can, check tomorrow's puzzle :-)

I don't think I want to swim in that river.

It's so crowded that they have to live on the river

Beautiful puzzle
Strange that people can survive in such places. I surely wouldn't feel safe...:-)

I agree, I have none, and I wouldn't buy it either.

The goats take their name from their origin in the Himalayan region of Ladakh, Jammu and Kashmir.

Spelled differently indeed... In Dutch it's (almost) similar.
But the goat is spelled like the region :-)

If you are thinking about cashmere, animal-hair fibre forming the downy undercoat of the Kashmir goat and belonging to the group of textile fibres called specialty hair fibres. Although the word cashmere is sometimes incorrectly applied to extremely soft wools, only the product of the Kashmir goat is true cashmere

Judged by this image, it's a poor region. Isn't kashmir also an expensive fabric?
Thank you for the research, jum

Jammu and Kashmir is a region administered by India as a union territory and consisting of the southern portion of the larger Kashmir region, which has been the subject of a dispute between India and Pakistan since 1947, and between India and China since 1962.