Take the Skyway to South America 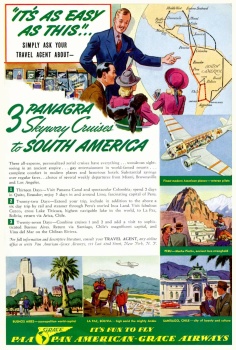 Created by luckywest Published 2 June 2022
Why this advertisement?

Inspired me to look it up.....from Wikipedia:

Brownsville was once the main terminal for air service between the United States and Mexico. In 1929, Pan American World Airways acquired a controlling stake in Mexicana de Aviación and began Ford Trimotor service between Brownsville and Mexico City, eventually extended to the Yucatan Peninsula to connect with Pan Am's Caribbean route network.[3] On March 9, Charles Lindbergh inaugurated this service, landing at BRO after a five-hour, 38-minute flight from Mexico City. An event was held on site in Lindbergh's honor, with a crowd of over 20,000 greeting him upon his arrival. Among the attendees was Amelia Earhart, for whom the main street in front of the Airport is named.[4] Brownsville became an early center for technical development in instrument navigation ("blind flying") due to the bad weather conditions that pilots encountered in the mountains over Mexico.[3]

Pan Am's service terminated in Brownsville, and passengers were initially taken on the Missouri Pacific Railroad to St. Louis, Missouri for rail connections to the northern US.[5] In 1931, American Airways was flying a multi-stop route Brownsville to Dallas, connecting to Chicago, Los Angeles and other cities.[6][7] Braniff Airways began service in 1934, and Eastern Air Lines arrived in 1939.[4]

During World War II the airport was redubbed Brownsville Army Air Field and used by the military for pilot training, engine testing and overhauls.[4]

In 1947, Pan Am's Mexico City route extended to Houston, and Brownsville was an intermediate stop. Pan Am service to Brownsville ended in 1962 as the Mexico City flight became a nonstop DC-8 from Houston.[8] In the 1960s, the 16th weather radar system in the nation was installed at BRO.[4]

@randlindsly I seem to remember an old friend's father being initially based in B'ville as a Pan Am pilot.

Makes me wonder what ever happened to Brownsville as a major international airline hub. :-)