MEXICO – The fumaroles of Popocatepetl – View from the plane 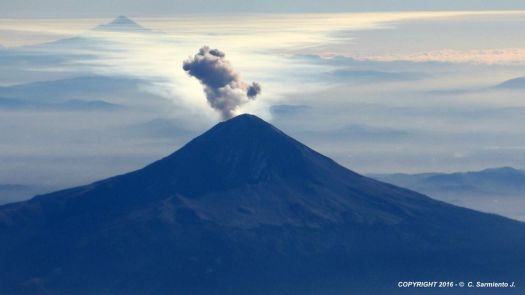 Popocatépetl is an active stratovolcano located in the states of Puebla, Morelos, and Mexico in central Mexico.

It is linked to the twin volcano of Iztaccihuatl to the north by the high saddle known as the "Paso de Cortés".

Izta-Popo Zoquiapan National Park, wherein the two volcanoes are located, is named after them.

Popocatépetl is 70 km (43 mi) southeast of Mexico City, from where it can be seen regularly, depending on atmospheric conditions. Until recently, the volcano was one of three tall peaks in Mexico to contain glaciers, the others being Iztaccihuatl and Pico de Orizaba. In the 1990s, the glaciers such as Glaciar Norte (North Glacier) greatly decreased in size, partly due to warmer temperatures but largely due to increased volcanic activity. By early 2001, Popocatépetl's glaciers were gone. Ice remained on the volcano, but no longer displayed the characteristic features of glaciers such as crevasses.

Lava erupting from Popocatépetl has historically been predominantly andesitic, but it has also erupted large volumes of dacite. Magma produced in the current cycle of activity tends to be a mixture of the two.


IN LITERATURE AND ART
Popocatépetl and Iztaccíhuatl feature prominently in Malcolm Lowry’s 1947 novel Under the Volcano as well as the novel’s 1984 US drama film adaptation directed by John Huston.

The legend of the two volcanos feature as the central story in Duncan Tonatiuh’s young adult fiction The Princess and the Warrior : "A Tale of Two Volcanoes".

Several works by Dr. Atl feature Popocatépetl. Among them his 1928 Self-Portrait with Popocatépetl, now in the Philadelphia Museum of Art and his 1942 The Shadow of Popo, now in the Museo Nacional de Arte in Mexico City.

Diego Rivera depicted Popocatépetl in several of his works, but arguably most famously as the dominating backdrop of his 1904 oil painting The Threshing Floor ("La Era"), now in the Museo Casa Diego Rivera in Guanajuato.

Popocatépetl also features prominently in the Juan Manuel Martinez Caltenco mural on the upper floor Municipal Palace of Atlixco, Puebla. The murals cover much of the palace’s interior and represent an important Poblano contribution to the Mexican muralism movement.

The volcano is also referred to by Mexicans as "El Popo" affectionately, or to shorten the full name. The alternate nickname "Don Goy"o comes from the mountain's association in the lore of the region with San Gregorio, "Goyo" being a nickname-like short form of Gregorio.

The name was extended by those who lived in Santiago Xalitzina, a small community that resided 12 km from the volcano. Legend says that many years ago, a villager met an old man on the slopes of the mountain, who introduced himself as Gregorio Chino Popocatépetl. Gregorio was a personification of the spirit of the volcano, and communicates with the locals to warn them if an eruption is about to happen. Thus, every March 12, the day of San Gregorio, the locals bring flowers and food to the volcano to celebrate the saint.


GEOLOGY
The stratovolcano contains a steep-walled, 400 m × 600 m (1,300 ft × 2,000 ft) wide crater. The generally symmetrical volcano is modified by the sharp-peaked Ventorrillo on the NW, a remnant of an earlier volcano.

At least three previous major cones were destroyed by gravitational failure during the Pleistocene, producing massive debris avalanche deposits covering broad areas south of the volcano. The modern volcano was constructed to the south of the late-Pleistocene to Holocene "El Fraile" cone.

Three major Plinian eruptions, the most recent of which took place about 800 AD, have occurred from Popocatépetl since the mid-Holocene, accompanied by pyroclastic flows and voluminous lahars that swept basins below the volcano.

Popocatépetl is currently active after being dormant for about half of last century. Its activity increased in 1991 and smoke has been seen constantly emanating from the crater since 1993 (this photo).

The volcano is monitored by the Deep Earth Carbon Degassing Project.

FLIGHT FROM OAXACA TO MEXICO CITY.
Created by csarmientoj Published 4 days ago