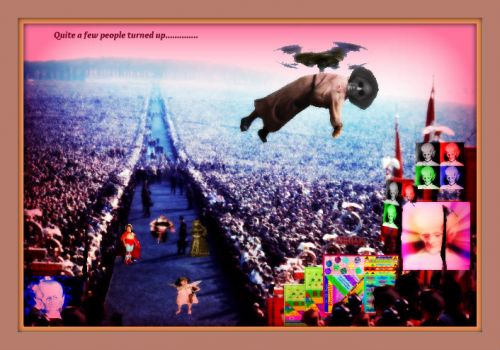 This was the scene yesterday in Bonga-Bonga, as enthralled crowds lined the small pathway leading
to the Bugosi Eternal Life Church (B.E.L.CH), setting for the wedding of Adonisette Bugosi and Norbert
Lefft........
There was a slight incident when a fat man with a bedraggled beard attempted to steal the limelight
by cycling into the church.......he was promptly ejected by our crack troops.....I mean, assistants.......
In the photo, we see the bearded intruder pedalling with all his might, in order to get past the ever-watchful eyes of Kaleidoboy and Desmondina.......who were looking the other way......
The faithful supporters of Bugosiland proundly display our weekend flag, our weekday flag, and images of their benevolent leader (who happens to be me), while our photographer has managed to capture sweetlittleoldgranny in mid-flight, (before she got drunk) as she surveys the glorious scene below........
Created by lelabugosi Published 24 April 2013
Why this advertisement?

I have safety pins - big ones! For overgrown babies who are still in diapers! Good thinking Junee

Ah well who can blame her, it's so squishy and pinchful. Must be the tight pants that turns her on. keep your cloak tight shut to lessen the temptation

Yes and I suggested we micro chip her! No more of her jumping out and scaring you K Boy! Naughty naughty church lady.

Oooooh, where am I? And who was that masked man?

I'll have that on the go then with wustard and melish please.

I miss SLOG pole climbing. Am I (we) still at the wedding? Do I/we have to shuffle along. there are more frestivities and twine to sip?

I didn't realize there were that many attending the wedding. I did get close enough to see everything but only got home now as it was bedlam trying to get away from there after the ceremony. Should have had SLOG pick me up!!! Thanks Lela!! :))))
(time, 1:51)

Million of Millions, almost a billion came to this glorious event in Bugosindialand, am I right?
It think Partysquare thought it was a race, who got first would marry Norbert.

You've got quite the inflated ego there, Lela. Here it is a wedding, and instead of decorating with pictures of the couple, you have to plaster your own image everywhere! Shame! Shame, I say!!!

If you think I'm gonna give you an alibi after that pathetic performance, you're crazier than I thought, peesquirt!

I have no present recollection of any such event!

I ran out of gas. I... I had a flat tire. I didn't have enough money for cab fare. My tux didn't come back from the cleaners. An old friend came in from out of town. Someone stole my car. There was an earthquake. A terrible flood. Locusts! IT WASN'T MY FAULT, I SWEAR TO GOD!

ChurchLady is passed out in the bushes. Where's Jignut?.....That was some wedding but I want to go home now.

HA is what I say to your fuzzy, blurry, tiny little image of some anonymous large person riding a generic little bike which may or may not be pink. I happened to be in Cincinnati when "The Wedding Of The Century" was being so shamelessly and obstenstically staged before the world press, purely for the ecomonical and egomonical benefit of Bonga-Bonga's economy and its leader's personal gratification.

And also, too, besides, plus which furthermore, there's something decidedly Jim Kong-Un about lelabugosi these days. Don't you agree? I mean, he rules a teeny-weeny country of no importance in the world, with no presence on the world stage except these ostentatious but slight "events" he stages, trying to keep HIMSELF in the limelight.

Our host may be sinking lower and lower into the special kind of madness which grips all long term abusers of Tadpole Wine. BEWARE ALL ! ! ! ! BEWARE OF THE ADDICTION ! ! ! !

just you stay close to SLOG she will keep her away from you, when she is sober

I just hope that church-lady-madame-thing has gone back home......she wouldn't leave me alone.......then that black crow pooped on my cape, and laughed!........

read all about the events on the wedding invitation puzzle

Famous picture ! this time I understand , maybe becouse I was there . You did not recogniced me ? The little angel of cours. many thanks .