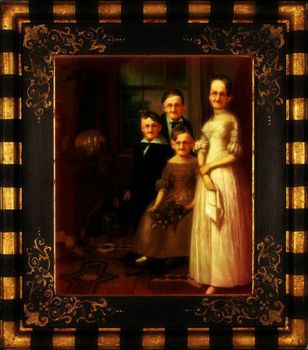 This painting shows a beautiful Bugosi family of days long gone by.......They are ancestors of uncle/dr.Adonis B., and they are believed to have been the first Bugosi family to make a name for themselves in America, as Claude Bugosi, the patriarch, changed his name to Claude Burgerosi when he opened the very first hamburger establishment in the country.......
In later life, Claude went one step further and made another name for himself, when he changed his name to Macdonald and bought a farm........This gave rise to the popular song "Old Macdonald had a farm".......
Meanwhile, the hamburger enterprise had done so well that he now had a chain of businesses, which are now known the world over as "Mcdonalds" (through a spelling mistake, the "a" was dropped)......
Of course, their true name should be "Burgerosis".........or "Bugosis".......
Created by lelabugosi Published 16 May 2013
Why this advertisement?

Oh, by the way, he also professed to be fond of rattlesnake meat.

You'd never suspect it to look at his offspring, lela.

Thank you all for your enlightening (and not so enlightening) contributions.......
I find it interesting that Plumpy's father was an anteater......
thousands-of cakes......Alfalfa may well have been a Bugosi, as our children are often referred to as 'little rascals'......

Interesting family portrait. Could it be that Alfalfa was a Bugosi. It looks a little like his hairstyle on the Bugosi on the left!!! No bugs/insects here please!!! Thanks Lela!! :))))
(time, 1:50)

you can have my bugs, I have eaten sufficiently well

Indeed - patsy you are SO right! We NEED the bugs - they have jobs to do and if not, it's their job to be eaten by other bugs or spiders or birds og frogs or lizzards or fish that jump for them or natives in the desert starving or... - the world would die without bugs. I do admire these people who kept their mouths firmly shut to let others who needed it eat the bugs!! Hail to the Bugosis!!

Lela B... once again we have been gifted with the interesting history of your family...they are an amazing group.
David your first witty endeavor was a clever and fun...enjoyed it immensely...but the latter made me a little queasy :^Þ

Ooh! Yours too, David?

My dad's coolest move (to us kids) was , he'd be working outside in the hot summer sun, and he would put his hand above his head, reach down with his index finger, wipe the sweat off his brow and fling a big stream half-way across the yard! But he never ate a bug. Except once. A fly flew into his mouth, and he gagged and said, "Quick, get me some water! Naw, wait. Let him walk down."

And all the other kids wished he was THEIR dad. So cool.

Hey we mus be siblings

My dad, when he wanted to freak out his offspring, very ceremoniously collected the largest black ant he could find, lifted it heavenward, contemplated it for a moment, then down the hatch and he licked his chops in great satisfaction. His offspring were appropriately freaked out.

I Owe
everybody an apology or some such

Were you away? We didn't miss you, hockey puck! No, I'm only kidding. Look at him, he's crying already.......wake up, you Jonestown graduate! Bugosiland is a marsh of uncivilty!

I am but away a week and what has happened here? PSquire is melting from hunger? He will soon fit his pink bikette.

The UN tells us insects are rich in nutrients, and the solution to world hunger. But you have to ask yourself, or I have to ask myself, or you should, anyway, or I will ask for all of us, do we really want the indigenous bug-eating cultures of the world swelling in numbers (and size)? Aren't there more bugs in the world than, say, crops of wheat, rice and corn put together?

Isn't there a danger, a grave danger, a mortal danger to the civilized societies of the world, a danger of being overwhelmed by insectovoids, buggules and other verminians?

And another danger, the REAL danger, the THREAT to our peace and sanity will arise when the bug-eaters' numbers (and size) swell to such large, such colossal, gargantuan proportions that the bug numbers themselves start to dwindle! Because then we'll get Nalph Rader and Former Vice President/Nobel Prize Winner Gal Ore up on their electronic soap boxes, screaming about the "debugulation of the world" and all that global-cataclysm crap! OY!

Somebody shut me up before I get carried away here! What was the question? Oh, I remember. Poor people - free food. Flies. Ancient Bugosis. Mumble, mumble . . . . . now I'm hungry.

What really is puzzling me is - why NONE of them have got teeth!!! Now I understand better that Adonisette hadn't either!!! Is it a special gene - or too much tadpole wine from early age???

Oh, I don't know....I think there are a few choice 4-letter words that would suffice to describe.....

Yes gerdjy-thingy-numbers.......I think the female side of the 'Adonis Bugosis' have a beauty that words alone cannot describe............

nice and beautiful and amazing

oh lots and lots of lovely learning, I would be lost without the Lela files' Witless and languid I would lie on my chaise longue, all drooping lilylike and wailing. A life, a life my living room for a life.

Plumpy........what makes you think that?........It's not as though they all look remarkably similar.......though there may be a very slight resemblance between them........
granny-not-munching & Juneee-soon-will-be-shining........I am glad you have learned another snippet of useless...I mean, useful, information.....

oh, how touching. Looks as if there has been a lot of touching going on in this family. Well why trust strangers? Nice to learn the origins of Muckdonalds

I'm beginning to suspect that the Bugosis are alarmingly inbred.

As always, I am impressed at the impressive impresario-al Bugosi family....to think 'twas Claude, himself, that started the junk food craze in America......to paraphrase a famous French royal matriarch....."Let them eat hamburgers".....