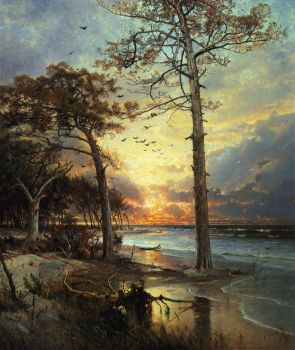 This would be before all the casinos--such a pity.
Created by Bommom Published 3 July 2015
Why this advertisement?

And, of course, Atlantic City probably hasn't looked like this since William Trost Richards sat there with his easel.

Reading this commentary today makes me wistful for a more innocent time -- 2 years ago, before the nightmare was a reality.

True, everybody needs a class clown.

Well, at least some comic relief has been injected into the Presidential race.

Yes they were, and so sad they're gone forever. Should anyone wonder just whom the pompous combover is, here's a clue. How to put it to a city, several times over.

Kind of dreamy, isn't it? Well, Richards had one thing in his favor when he painted this back then - not too many folks around there yet. By 1880, there were only 5,477 residents in Atlantic City and that pompous combover with delusions of grandeur wasn't even a blip on the radar yet. Yes, those were the good old days.

I can't describe Atlantic City, today. I'm old enough that I've seen it through several iterations--each supposedly an improvement. I've also seen the back streets, which are much like the back streets of any city--not glamorous, by any stretch of the imagination. I wish I had been able to see it as Richards painted it.

I've never been to New Jersey or Atlantic City. If you hadn't told me, I'd never have believed it ever looked like this. It's beautiful.

I can't decide if I am thinking this is beautiful because it just is in its own right, or because it is what was.