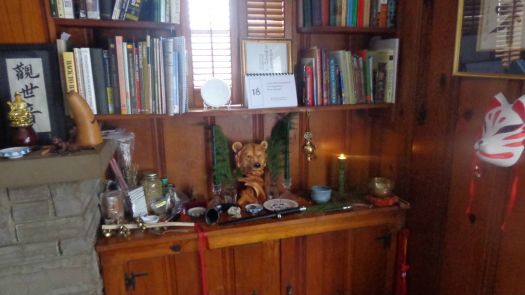 This is my "church" where I practice my faith. I'm an Urktos-vede. The faith is pluralistic, and whatever deities you find helpful are a-okay. The Faith is based on the paternal relationship with the God Urkto who takes the form of a bear and is the teacher of humanity. His associations include herbal medicine, the hunt, fishing, warmth, the Forest, prosperity, and protection. To his left or our right, there is Ecnis Mater, a Goddess of the Hearth. You cannot see the image of Feos on the left, but He is a God of Fertility who takes the form of a Bull. Beside him are the sacred herbs of the Faith. To the far left is the golden image of Avalokitesvara Bodhisattva or Guan Yin and His name behind Him in Chinese. On the topmost Altar are a Kagami mirror dedicated to Ame no Uzume no Mikoto (Japanese Dawn Goddess) and a framed Tablet bearing an inscription in Japanese known as the Tenchi Kakitsuke, encouraging prayer to Tenchi Kane no Kami on a daily basis. He is the essence of the heavens and the earth in Konkokyo.
Created by naturelovingfarmer Published 29 November 2019
Why this advertisement?

Some pueblo potters paint their pieces with a mixture of graphite and kerosene just to be sure, but I don't think it is really needed and can become expensive quickly.

You get the complete black by eliminating oxygen when the pottery is glowing the color of orange peel. You have to get it really hot for the color to penetrate more than a few molecules deep. Basically, oxidation firing until it glows that color, then add a bunch of charcoal and close off all the holes and let it cool for an extreme reduction. This can work in a pit by covering the firing with a layer of mud and then a layer of dirt. If the heart of the fire is exposed, cover with copious green material first.

I'm familiar with both Amanda Swimmer and Kanzaki Shiho, but haven't studied either. You have a couple of great inspirational potters! Have you done any pit firing? It's so satisfying. I've never been able to get the complete black ware but use horse manure and end up with some lovely "flashes," mostly using my favorite porcelain body. As to the anagama firings of Shiho, I've only been blessed once to experience Anagama while in college. We spent a couple of days chopping wood and the firing lasted for several days. What a thrill to see the results. And, of course, it's wonderful to experience both ancient firing techniques. Relate to you in your appreciation of Korean ceramics. There are so many thrilling styles from various cultures. It's great that you've experimented with corded ware!

It can be mind melting.

Speaking of pottery, One of my major early inspirations was the work of Amanda Swimmer. She does hand built pottery which she pit fires in a way to make it black. It is also often beautifully decorated with incisions and burnished. I'm also inspired by Kanzaki Shiho (He's a living national treasure in Japan), and by 1500s era Korean pottery in general. Those Korean pieces were how I learned to carve my work and do inlay. I have made corded ware reproductions using a hand woven rope.

Well, I'll never catch up with all of this info! :) When you brought up Indo-Europeans I remembered a book I've been carrying from one residence to the another since the mid-90s. I bought it when I was taking Anthro and Archaeology courses in college. But I never read it. Found it last night - "In Search of the Indo-Europeans: Languages, Archaeology and Myth," by J.P. Mallory. I don't know anything about it but now that this has come up, I'll start reading (in between all the other books I've got cracked open). I'd forgotten that one reason I bought it was its references to pottery and the expansion of the Corded and Beaker cultures. At the time I was also taking a ceramic course that focused on Mythologies and Culture. Was so busy finishing my degree that the book ended up in boxes. You recall information far better than I do but bringing this up is re-triggering interests, so thank you. I remember one classmate who was majoring in Language and her references to language origins, including some of what you've said here. It was interesting and complex but also very exciting...

Will respond later. Thanks for reminding me about the Yamnaya people.

Gotta get some work done. And thank you for the other wonderful puzzle. I responded to your last comment there a while ago. :)

Have you heard of the Yamnaya people? They lived in the Pontic Steppe about 6000 BP. They were nomadic herders and rode horses extensively. In fact, they were quite enamored of the chariot and used it long before the Egyptians did. Coincidentally, you and I are their descendants and are speaking a language descended from theirs. They spoke what is now called Proto-Indio-European. And of course, they are probably the most influential people to have ever walked the earth (for good and bad). Words from their language had found their way into Japanese by the 8th century CE. "Nama" being the particular word I'm thinking of. It sounds almost the same as the English word "name" before the great vowel shift and has exactly the same meaning. The Japanese changed the pronunciation to "namahe" and then "nama'e" over time, but you can clearly see the continuity. Nama is now used to indicate freshness while nama'e is used for name.

Also, I posted a new puzzle just for you, hope you like it.

Ryan, your interests and research follow many of my own. I've been fascinated by migrations and origins for a long time. There are several groups of migrations that make up Native American cultures. The similarity between the Eastern Siberian cultures, including the Ainu of Hokkaido Japan, and the Inuit, and First Nations of Western N. America is striking. I gravitate to far Northern cultures across the planet. I don't know if it's an ancient DNA or just a common bond through the diverse spirituality of those cultures - the zoomorphism that runs deep in those original beliefs, when humans were brothers and sisters to all creatures.

It may also have to do with being raised in Washington state where the coastal climate, rainforests, raw icy waters (both fresh and salt) created such rich imagery by early indigenous people. Whatever it is, I don't question it and it runs deep. And, of course, because I am a horse person, I relate deeply to the ancient horse cultures, including the Mongolian steppes - may be why living in eastern Montana triggers a kinship, too. Our High Plains rolling off the rugged Rocky Mountain Front could easily be supplanted by the Mongolian steppes.

There is no justification for making anyone the "other." Completely agree with you. I'm reminded of friends who had the direct link to their ancestors and during sweat ceremonies would repeat the most beautiful phrase, "All my relations..." Yes, Mitakuye Oyasin. Just breathing that transforms everything into unity.

I appreciate you sharing...

I did not know about the Blackfoot lore. I got those ideas by talking to a Finnish shaman and by talking directly to Urkto. I'm not surprised however. A branch of the Ancient North Eurasians that I'm reconstructing the religion of also crossed into the Americas when they split up about 10,000 BP. I am familiar with Iroquoian mythology, esp the Southern Iroquoian branch, and they do not revere bears. But I personally think that the Tipi-dwelling tribes of the Plains are not as closely related to the Iroquoians as they are to the Siberians. And I have a good reason for it, though without DNA tech, I can't prove it. My reasoning is that Tipis are not only found in North America, they are also found traditionally in Siberia, Mongolia, and among Finno-Uralic Peoples. That relation is not to diminish the land rights of the Indians, they were here long before Europeans. But as the Lakota often say, We're all related. I think that despite political implications, finding those connections has value. I think it will bring us together and ease tensions from past trauma. The only way you can justify the horrors of genocide, are to convince yourself of the "otherness" of people who are, in reality, your own family. To keep it from happening again, we need to understand those connections and repeat often the phrase Mitakuye Oyasin.

Christy the branches are Arborvitae and yes, he made the blue bowl. He's catching up on his sleep from a panic attack. He's fine now!

I finally had a chance to solve this and look closer. The Bear sculpture and mask to the right are wonderful. Are those Cedar branches flanking the Bear sculpture (or juniper?). I see a small pale blue cup - is that yours? The Altar feels so good...

Bear is a dominant character in Blackfoot lore here. A close friend is Blackfoot and he plays the part of Bear in storytelling dances. He created a giant Bear that he manipulates with poles when the story of Bear is told. Bear, like your description, is the one who taught the starving humans how to find roots, seed, berries, to survive. Grizzly seems to be the main source of the lore.

No problem. I think it's important to know our roots.

Ryan, your description, below, fits...well, it fits into my own sense of seeing/feeling. An innate connection to our ancient origins, particularly Paleolithic/Mesolithic/Neolithic. Anytime something reaches out from the depths of our "memory" it yanks at the soul. You have better words than I do. I understand your connection... Thank you for this.

Wow! Interesting! (Too complicated for me though - I get easily confused!)

:) I will remember that Nancy. I was going to tell Ryan I am very in tune with the Native American Indians (The Lakota) and try diligently to walk the Red Road daily which includes the seven sacred virtues of the Lakota: prayer, honesty, humility, compassion, respect, generosity and wisdom. I am a very spiritual person and have gleaned much from all different beliefs.

Ryan if you were holding back you definitely would have left me in a cloud dust!

I was holding back.

@Isaly Ryan has a tendency to get into too much detail and overwhelms people. When he does that to me, I tell him "Simplify! You are making my brain hurt!" Feel free to copy my strategy!

No problemo. I'm actually the one reconstructing it. Nobody else has shown interest, but if you want we can work on it as a team. It is a daunting task, but I am discovering what it means to be human along the way. It's sometimes pretty fun. You end up reading about all the descendant cultures, and descendant languages for clues. Typically where many descendant cultures hold one belief or cultural norm in common comes from the ancestral culture. This is especially true of cultures that are separated by distance and/or physical barriers.

Well, you might have trouble finding info on Urkto, Ecnis Mater, and Feos with just a google search. The others are from other religions, so that should be easy. Urktos-vede is my title as a priest of Urkto. The faith has no name. It is the reconstructed semi-shamanic faith of the north-western branch of the Ancient North Eurasians during the Paleolithic-Neolithic transitional period.

Ryan I LOVE your alter. Thank you for describing everything on your altar. I will have to do some research on Urktos-vede. That is new to me.