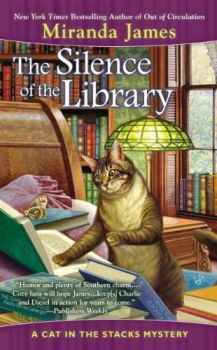 It’s National Library Week, and the Athena Public Library is planning an exhibit to honor the centenary of famous novelist Electra Barnes Cartwright—creator of the beloved Veronica Thane series.

Charlie has a soft spot for Cartwright’s girl detective stories (not to mention an extensive collection of her books!). When the author agrees to make a rare public appearance, the news of her whereabouts goes viral overnight, and series devotees and book collectors converge on Athena.

After all, it’s rumored that Cartwright penned Veronica Thane stories that remain under wraps, and one rabid fan will stop at nothing—not even murder—to get hold of the rare books...
Created by Bibliophile Published 26 January 2021

I just finished the book shown in this puzzle and am starting on the 6th of the series. All of the characters are endearing and the plots, although somewhat predictable, are interesting and fun. Thanks! Dotty

@dotshell, I am allergic to cat dander, I didn't used to be. I
remember when I was in junior highschool, our cat had
kittens, they slept in my room, and I would awaken to them
pulling on the hair rollers in my hair, they would be all over
my bed, but now.........If I weren't allergic, I just know I would
have a houseful, I would be that crazy old lady with all the
cats, more than the city law would allow. Yes, I have read
her books, and it has been years, so I have them on my
wishlist on my e-reader, I am still reading the cat mystery's
that I have, thanks for reminding me of that. Bib

Bibliophile, Although I'm allergic to cats, they do make fun characters. Have you read The Cat Who series by Lilian Jackson Braun? Wonderful fun.

Great, you all will enjoy this series, and after reading just a
few of these books, you will feel like the characters are
neighbors and friends, I have read for of these books and
I find myself wondering, "what am I missing, what is that
cat up to now?" Thanks for the comments. Bib

Bibliophile, I just downloaded the first of this series from my local library. Sounds like a fun series. I love mysteries. Thanks! Dotty

I will be trying this series for sure! grins!☺

I hadn't heard of this series. Sounds interesting. I will have to look into these. Many thanks for introducing me to these.