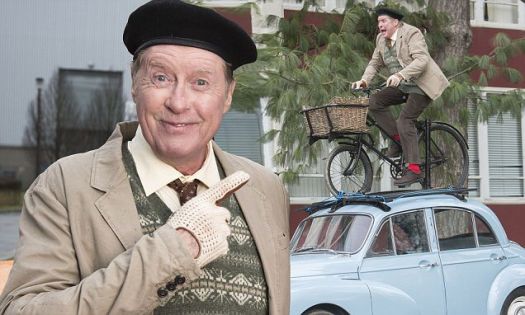 @unicorn3 Young Wendy ( Sharron ]
It was called Keeping up Appearances, she was Hyacinth Bucket and long suffering husband Richard. I will try and create a puzzle sometime.
Watching the World Cup football at moment Iran v Spain.

"Keeping Up Appearances", that was it. Told you I'd think of it. Other favorites are "On The Buses", "Are You Being Served", "Fawlty Towers", "Mrs Brown's Boys", and the list goes on. Can't find any of them on the television anymore and I really miss them. Remember that little waiter in "Fawlty Towers", Manual? When we were in a restaurant in San Francisco years ago, there was a waiter there that was this guys clone, so he used the resemblance to really put on quite a show. He was hilarious and made quite a few huge tips. "Keeping Up Appearances" was, other than "Some Mother's Do Have 'em", is my favorite................Wendy

Love this one Brian. My little laptop screen and my eyes cannot handle 60 pieces. This is a great picture. My late hubby and I absolutely loved this program. We laughed so hard. We both really love British comedies. One of my favorites, and I always forget the name, her name in the series was Mrs. Bucket but she insisted on pronouncing it "bouquet", man, it is hilarious, and her poor husband. I know I'll think of the name of it later!! .........Wendy

@unicorn3 young Wendy, is this the one you liked !

Thanks for great comments scrabblelover , cheers from Norfolk England.

More than 40 yrs ago (AF wife then), lived in England (loved every minute!). Watched him on the telly in a show called "Some mothers do 'ave 'em" -- so funny. My husband turned off the TV, said I was laughing so loud I would wake the baby. He wouldn't watch, said it was too crazy. I love to laugh and I'm still here. He died decades ago, grumpy.