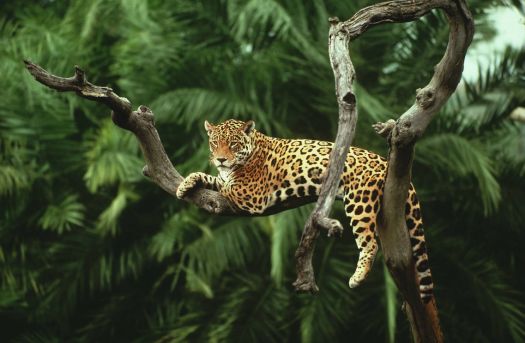 Jaguar casually surveying it's kingdom
Created by Amazonia1805 Published 18 February 2015
Why this advertisement?

Don't expect too much in way of sympathy, Amazonia....humans started hunting wildlife to extinction about 10,000 years ago. Didn't stop yet....

Yes, it's sinful in our modern world that so many species are in such real danger of extinction. The fact that people still continue to kill these animals/destroy miles of wilderness despite knowing full well what they are doing is deplorable. We look at when a species in the past has been wiped out, with the view that people in the past where less informed, didn't realize what they were doing, etc. Today, there are no such excuses. That's the tragedy of it.
To catch glimpse a creature like the beautiful, elusive jaguar in it's natural habitat, should fill us with a feeling of reverence, to be able to witness such a rare+special moment. ; )

It is just too bad that there is so few of them left in South America. And they are so secretive to boot. Thankfully there are some scientists that are studying them so maybe that will help with saving the species from extinction :)

Love my jags. Lol. Check out my past posts, I'm sure there'll be more that you'll like. ; )

Beautiful and powerful cat, thank you for posting this photo :)

Thanks craswench.
Hey sis, isn't it! Fantastic HD shot, wish I knew who the photographer is. I found this on a wallpaper site, gave no info.
I find it ironic that we often see photographs of Jaguars like this, lazing or sleeping on a branch, yet they are the more energetic than their larger big cat cousins, the lion+tiger, active for 50-60% of a 24hr period. ; )

such a majestic creature! good taste you have Amazonia1805

I'm a bit of an artist + collect lots of wildlife images as reference for painting/drawing, especially the big cats, wolves, birds of prey + such, as they're my favourite subjects for artwork. The Jaguar is the big cat I love most. ; )

such a beautiful creature!

Thanks hsdesign7. I go through phases, tend to make the wildlife puzzles smaller. When I do landscapes + colourful stuff, they're often bigger. I like to give a little info when I can - I just find everything interesting. Always have been, like my mam used to call me, a walking encyclopedia! I'll find an image with no information + if I don't know, hunt until I find out about it. It's good to learn something new every day. One of the reasons I enjoy being on jigidi. ; )

Great Image. Missed your lovely puzzles because I usually do the medium 60 - 120 sizes. I read a couple of your lovely comments and decided to check out your puzzles. Thanks for sharing!