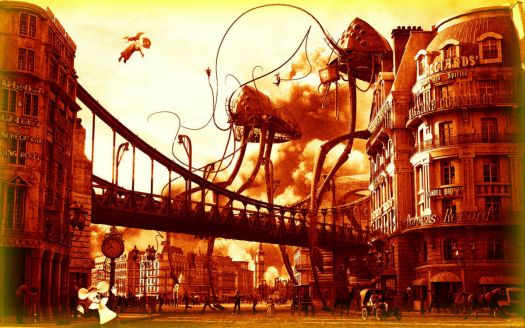 In my position as dynamically successful leader of one of the richest, happiest, hardest-to-find countries in the world, I am often asked to show something of the daily life of our merry metropolis......
Here we see the perfectly normal goings-on of a perfectly normal Bonga-Bongan day, as people go about their business without a care in the world, secure in the knowledge that come what may, their beloved leader will always be in complete control of the situation. (That's me in the foreground, waving nonchalantly to the camera).
Created by lelabugosi Published 2 September 2017

there was another bridge that could have been bought with lemons, err, oranges, but it no longer exists since it sank near the Port Of Call (and NOT Ghosty) during Jose but now is a port of ghosts, sadly, ever so sadly

some people would appreciate that

Well, looks like it's gonna be a dry harvest festival!

I believe Brooklyn is that way ☛

And I'm baack, also, as well, too!
I met an old man, who said he had a bridge he wanted to sell, but as I seemed such a nice boy, he'd trade the ownership papers for my sack of lemons. Well, I didn't need a lot of convincing there, as i know a good deal when I see one! And without the sack of lemons, I got back a day earlier.
Now I just have to find out where Brooklyn is.......

It's so nice to have Bonga-Bonga back to it's abnormal state.

And we love Auntie Juneeee!

kaleidoboy is just a sweet mixed up kid, no hoodlum and his Auntie Juneeeee loves him

I'm baaaack! just spent a whole week grabbing cantaloupes......
Oh, and while I was in the watering hole, Kaleidoboy was collecting lemons from the sacred grove. When I left him, he was carrying a sack full - he should be back in a couple of days.

Lela I am just mortified by the conduct of some of the people in me. I don't care what this nice young lady said about us that is no excuse to act uncivilized. Please extend my personal apology to Mr. Church Lady and I promise I will make every effort to keep my people under control at all times. :-) Now where is Master Henry and that hoodlum he's running with?

@Church_Lady Oooooooo no you won't be gettin' all up here in my biz Mizz Thang!!! Is you crazy??? If you don't believes in ghosts, who in the hell is doin' yo' makeup? Since you thank I'm a Portapotty from now on when the situation calls for it, it will be POOOOOOOT instead of poof where you're concerned. Oooooooooooo No 'she' di un!

The colors make this appear to be a lovely harvest scene....at least I think that is what the machinery in the image is for... Bonga Bongans on their way to the fields I suppose.
And now I have the Village people with Y M C A in my head.
https://www.youtube.com/watch?v=mMPSyOB2qNo

Poof yourself. I don't believe in ghosts GhostOfMrPortapotty.

OH! OH DEAR! I think I'm gonna faint!!! Where did we put that fainting couch?! POOF!

Honey I got the memory of hundreds of peoples in my head and I ain't found tha filin' cabnets yet!

Sweetie I believe those are the cantaloupes. Where's your parents?

Master Henry told me that the biggest, juiciest lemons can be found in the swimming hole.

YOU BOYS ARE SO NAUGHTY!!!!! I hope you aren't being a bad influence on my dear little (in places) sweetie pie!

Lela this is Gawldarn. How on earth could you send that...that.....child on such a dangerous mission!

I hope that answers your question.
As for Master Henry, yesterday he set off on his mission......he has not been seen since.........

Those things haven't damaged the Y.M.C.A. have they!

Ha Ha my friend, well noted, but alas comes the rub. That which cannot be seen cannot be felt. That which cannot be felt cannot feel. How does one pick something up without feeling it. I have no mass so I have no force to move an object. I simply pass right through. No! This would have to be done by a living soul. Maybe Master Henry? I have seen him sneaking into the grove many times. He knows the way. I don't know what he finds so exciting about the grove. The only other thing there, other than lemons, is the Nuns' swimming hole.

The point is my friend we can no longer trust lemons! Where can we get a safe supply for the lemonade for our harvest festival!? I know the Sisters of the Convent have a lemon grove but they are very protective of them!

This is truly amazing! https://www.youtube.com/watch?v=QW91tL03z1g&list=WL&index=61

I would rather see Roger blown away!

If you need the nuns with guns all you need do is ask!

SLOG always gets her man also, as well, too!

Well they did say it was arson! The RCMP are investigating but SLOG shouldn't worry...the RCMP always get their MAN, so she'll be safe!

She may have been having a BBQ round about there!

I didn't really notice as you see this all over British Columbia right now...180,000 hectares burning just west and south of my sis' place...SLOG must have been cooking for the general populous...

Cremated the chicken!!!! I think you incinerated several city blocks like Mrs. O'Leary's cow did back in the 1800's, Chicago!!!!

Hellooee everybody!
Well, I caused a bit of trouble there, Ms.Macaroni.......went out and left the oven on......cremated the chicken!
Junee - I believe that I am the only other old world animal in Bonga-Bonga.

they look like pterodactyl are there any other old world animals in Bongaland?

squashtop......But that is why it is called 'rush hour'!
thousands-of-cakes......sweetlittleoldgranny had left her oven on......

Those things do remind of "War of the Worlds"!! I hope they won't knock down the bridge.
Handsome buildings you have there in Bonga-Bonga. Are those storm clouds coming in or smoke or what?? :))))
2:36
26

Waving back (nonchalantly) to you in the background. Although a typical day in Bonga-Bonga, the populace seems to be a bit frantic in their day to day movements. I am not one to question their happiness, but do hope that a life less frenetic, more peaceful, and just downright happier life, will come to the folks of B-B.

Yes, she is actually one our jet fighters.

How wonderful to see that in spite of aliens trying to annihilate Bonga-Bonga and all its occupants, it has risen up greater than ever. It is so exciting to see these three vehicles during rush hour. And even though a great storm seems to be approaching our indefatigable little postman is happily on his rounds!

The skies look sufficiently well patrolled already. SLOG is on the job!

At least there are none of those Great White Space Worms!

P.S. Where can I get me one of them dune buggies with the awning?

There's nothing to worry about with them. If I remember ''War Of The Worlds'' correctly, the Martians inside are highly susceptible to every microbe, bacteria and virus on the planet.


Every Oct 30th, at 8 pm, I listen to a recording of that great broadcast from 1938, performed by Orson Welles' Mercury Theater Of The Air. I curl up in a comfy chair with a large mug of hot cocoa and a bowl of popcorn, turn off the lights, and enjoy myself. I'm such a fan that I've actually visited Grover's Mills, in New Jersey, where the invasion allegedly started.

One of them nearly stood on me, and I swallowed my whistle.......now, every time I breathe out, i hear a "PEEP"!

Those long legged things remind me of the alien vehicles in H.G. Wells' "War Of The Worlds". Are they a regular part of the local ambiance?

Sometimes-surreal........Desmondina was on duty here.

Plumpy-marsupial, I draw your attention to our past disquieting discourse on p***********

Compared to the goings-on here in the USA, this DOES seem peaceful and idyllic.

Who's in charge of traffic control, H.G. Wells?

Auntie Juneee, that's just what Master Henry said I should have!

a beach chair on a traffic island would be peaceful too

Yes, it's so calm and peaceful that sometimes I find myself wishing that something exciting would happen.