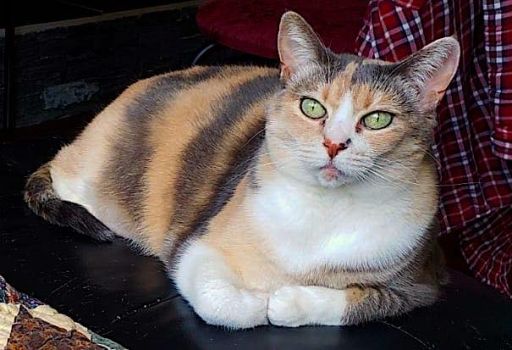 Feisty, skittish Ginger is our only female, added to our three young men in 2012 in the hope of giving Ebony, our shyest cat, a companion, since our other two (littermates) were completely ignoring him. It didn't work as hoped, but she changed the dynamics so Ebony wasn't always alone. This morning, December 2020, Ginger snuggled with Ebony on the bed covers down at my ankles and gave me an excuse to stay in bed a little longer.
Created by beyondwords Published 10 December 2020

What a beautiful colour Ginger is. A very pretty puss.

Ginger Grant! That's funny. She was the movie star in Gilligan's Island.

This is a beautiful cat. I just looked over your puzzles and enjoyed them, especially the cats and the garden pics, one of my favorite pastimes.

My only calico, way in the past, was indeed quirky but not skittish. We're told that Ginger is a dilute tortoiseshell with some calico. Maybe others can suggest something better. I'll ask my partner to take a photo that shows her markings from the top--those stripes are reversed on the other side.

Ginger has a checkered past. Apparently she was semi-feral when rescued, spent some time in two foster homes, was adopted and then returned to the rescue org for multiple reasons including health of a family member and her own behaviour, and was then kept at the shelter, where she got along well with other cats.

When we went back to that rescue org from which we had gotten our other three cats, she was one of two cats strongly recommended to join our family, and we chose her. Her name was Ginger Grant (named for a TV character?) but we preferred just Ginger. I believe the shelter said she was a Level Two shy cat who had regressed to Level Three but would soon be back to Level Two and then better in our household.
For their grading of shyness, see
https://www.meowfoundation.com/adopt/selecting-a-cat/#shy)

In many ways she settled in rather quickly, but for many months would let us touch her only on the top of her head. She was very easily startled and would bolt even when we didn't know why. Now I'd say she's still at Level One in many ways. Skittish, quirky, our most playful cat, won't take anything from other cats, sets her own rules regarding human touch and where she wants her food bowl, and a lot of fun to observe.

I wonder if being skittish is a thing with calicos. Our calico does some strange things. I call her "crazy cat", when she has outbursts. 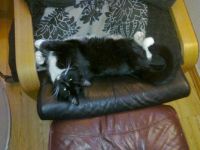 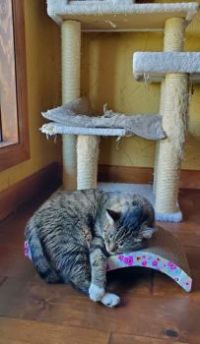