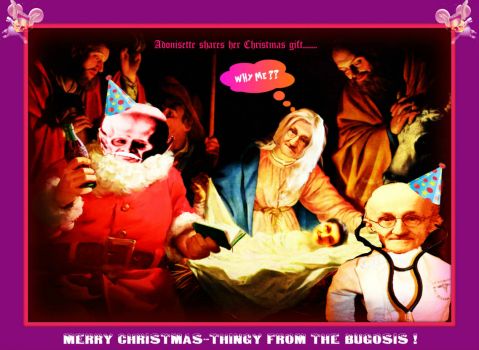 We have had a sort-of Christmas miracle in Bugosiland, as a totally-not-pregnant Adonisette has given birth to a baby boy.....
It so happens that the eminent neurosurgeon, Dr.Adonis B.Bugosi, was on hand and foot, in order to lend a hand ..... or two.......
As can be seen, the baby bears an uncanny resemblance to Norbert, the husband of Adonisette......
When questioned by a horde of reporters who descended on the broom handle factory where he was not-so-busy at work, Norbert simply shrugged his shoulders, saying "I know nuthin'"......
Created by lelabugosi Published 24 December 2015

Image copyright: Hippolytus, our man at the scene.

Merry Christmas to all in Bugosiland!!
Call them & let them know you're still waiting & you'd like to get it over with!!!! Sheesh!
Hugs

Mrs.B is still waiting the call to go for her operation/procedure thingy.......

Hope you had a great birthday celebration, lelabug.

Lelabug *of course* I and my elves and Santa's Helpers make all the toys and presents right here at the North Pole, and *of course* I deliver them in my fancy red sleigh, pulled by my eight tiny reindeer with Rudolph in the lead! How could you think otherwise? But when I go to the GROCERY STORE to buy a ham and all the fixins for Christmas dinner I drive my 1949 Ford V-8 with the bald tires (tyres)! Cookster, never fear, I found my nuts and they're back in place!

(((Yeah, yeah, your God is better than my God (yawn) and the Lutherans hate the Methodists and the Baptists never heard of either of them, and let's be sure we say all that baloney on a day of world peace and good will.)))

♫ ♪ ♫ Haaaaappppy birthdaaaaaay to yooooouuuuu!
You belong in a zoo!
You look like a monkey,
And you smell like one toooooooooo! ♪ ♫ ♬

Happy Birthday Lela B... Hope you had a good one !

Merry Christmas Lela B...
they all had Christmas dinner and now they are lolling around like beached sea mammals......Wishing you a wonderful day ☺☺☺

Thank you all! Just had Christmas/Birthday lunch.....with wine - without cheese........

Happy Birthday to our leader! (I hope I am not mistaken.) Here is a tribute to you:
http://www.jigidi.com/created.php?id=V7SRGPX7

It takes a lot of time to read all the comments and to understand them all (not allways possible ). Cookie , your last comment with the nuts was the best : it gives me a big laugh ! Sorry mr. Patsquire ...

I'm not Christian, but I have a blast celebrating Peace On Earth, Good Will Towards Men, and the spirit of giving and brotherhood represented by Santa Claus/ Saint Nicolas. ..... As well as the original holiday confiscated by Christians. Jesus wasn't born on Dec. 25th, he was born in the Spring, so in reality NO Christians are celebrating the TRUTH.

mistara-something.......Thank you for your wishes!

To all my Christian friends on Jigidi - Merry Christmas and a Happy New Year to you all!

I'm 15 hours late to the party! YIKES! I was away for Christmas! I mean, I was busy getting ready for Christmas! Um, I had to go to the store! Yeah, that's it! And on the way back my car broke down, er, had a flat tire (tyre). Yeah, and when I was fixing it I spilled all the lug nuts in the snow! And then I yelled, "Oh fuuuuddgge!"

MERRY CHRISTMAS TO ALL, AND TO ALL A GOOD NIGHT!

Perhaaaaaps...in the new year...I'll have to see how it fits in with my resolutions...

(Hey, wait a minute...now you're just rubbing it in with all the hearts, musical notes, and smiley faces, aren't you?)

Really appreciate the fact that you've remembered........you are a loyal 'follower' indeedy!!

What?!? I had stuck hearts and musical notes all over the place...stupid computer, server, whatever!

To continue...very Happy Birthday! May you and Mrs. B. celebrate the happiest of birthdays and the healthiest of years ever! I guess I'll have to print "hugs and kisses" as my sister's computer wants all the attention itself!

Thank you, precious-pebble, for your very wishes on my brand-new day!
6th. child......though one of the quadruplets spends a lot of time away from home, so he is often not counted......

Quadruplets and a fifth child in August...and this baby boy is Adonisette's 5th child??? But who's counting???

And let me be the first on your brand-new day to wish you a very,

And a Merry Christmas to you too, Santa-down-under!

A pure accident waiting to happen.
Merry Christmas-thingy whatever you are called.

Congratulations - and Merry Christmas to all of you - :-)))

How many stamps for this delivery?

Well she always has short and unexpected gestations... congrats and Merry Christmas
He looks like his dad!!! :)

Thanks a LOT ! I miss your crazy Bugosiland puzzles VERY much ! Happy days !

Thank you, sparkie......This is actually Adonisette's 5th. child (quadruplets, and another born in August), so it is truly a very mysterious mystery!

Virgin??? Adonisette? She can't even spell it!!!