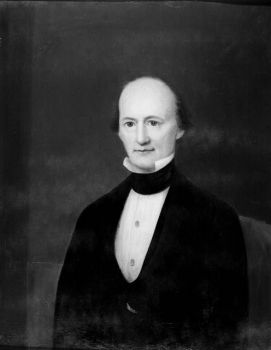 Charles P. Bertrand came to Little Rock in 1820 with his mother and step father Eliza and Dr. Matthew Cunningham of New York and Philadelphia. They were among the first six families to settle the capitol city of the new Arkansas Territory that had been created out of the Louisiana Purchase only a year earlier in 1819. Eliza was the first white woman to permanently settle in Little Rock.

Bertrand apprenticed the newspaper business in the original Arkansas Gazette under William Woodruff beginning at an early age. Bertrand began Arkansas' second newspaper, the Arkansas Advocate which he later sold to Albert Pike. Bertrand, the young newspaperman, apprenticed law under Robert Crittenden, Secretary, Arkansas Territory, and became a prominent member of the bar, assumed a prominent position in law, politics, land, planting, etc. He assumed great wealth before loosing it all during the great American war 1861-1965.

Charles P. Bertrand assumed an important role several times in Arkansas history. He did in fact convince members of a state militia to stand down from attacking the Federal Armory at Little Rock. As the Governor was out of state and Bertrand, being the highest elected official at hand, told the Militia that it would be an illegal act of war for them to attack the Federal Armory without the direct order from the Governor. If the Militia had done as they had planned the Civil war would have begun in Arkansas rather than South Carolina. Bertrand also negotiated the peaceful surrender of Little Rock so that it was not bombarded, burned or pillaged like other southern towns. Bertrand corresponded with Lincoln and met with Lincoln prior to the end of the war but died shortly thereafter in 1965.