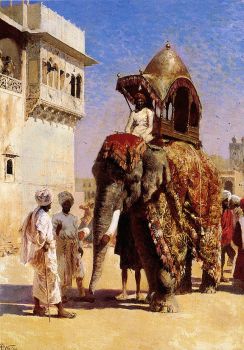 Weeks was born in Boston, Massachusetts in 1849. His parents were affluent spice and tea merchants from Newton, a suburb of Boston, and as such they were able to finance their son's youthful interest in painting and traveling.

In 1872 Weeks relocated to Paris, becoming a pupil of Léon Bonnat and Jean-Léon Gérôme.

After his studies in Paris, Weeks emerged as one of America's major painters of Orientalist subjects. Throughout his adult life he was an inveterate traveler and journeyed to South America (1869), Egypt and Persia (1870), Morocco (frequently between 1872 and 1878), and India (1882–83).

In 1895 Weeks wrote and illustrated a book of travels, From the Black Sea through Persia and India, and in 1897 he published Episodes of Mountaineering.

They would probably need a heavy coat like their woolly mammoth and mastodon ancestors to help them adapt to colder winter climates. The elephants of Asia and Africa possibly lost that adaptation in adjusting to their much warmer environments. That's my guess anyway...

I guess we're all geared for the habitats we were designed to inhabit.

Thanks Andy and Bill for pointing out the issue of the royal elephant's adornment and the heat issue.

There is an elephant sanctuary here in TN (http://www.elephants.com/meetElephants.php). The winter temperatures in TN is more than the elephants can handle without some warm housing.

That seems odd to me for an animal that has so much mass. I would think cooling off would be the problem, as you pointed out, not keeping warm.

Ah, so the ears are only part of the story. Very interesting! Thanks for the update, Andy.

The role of the ears in cooling has been overstated in the past, because that all we could see them doing in the heat - flapping away. I saw something recently about what they're now learning about how elephants 'keep their cool', but I don't remember who ran it. Here's a site that explains it well: https://elephantconservation.org/news-event/news-items/elephants-use-hot-spots-to-stay-cool/
I would imagine that many of the mughals, and keepers, tried to be 'humane' (who WANTS to piss off an elephant??), but still operated out of ignorance to some degree. Like draping them with decorative blankets.

Mostly it's their ears that provide the air conditioning, I think. But I wouldn't want to push my luck with a beast of that size. Surprisingly, some of the mughals were rather more humane than you might imagine--which says nothing about their "staffs," however.

I hadn't even thought of that Bill! It must have been terrible, since they depend on radiational cooling a lot. Covering up their 'hot spots' with ornate drapes is NOT a good idea. I wonder how often a mogul went flying as an elephant had a heat stroke or a temper tantrum?

Imagine how hot it must have been for the poor elephants forced to wear that garb!

At first glance, this made me think of Sargent. It must be how Weeks carried the feeling of the brightness of the day. Fancy ride! It was good to be the Mogul! Thanks Colleen.