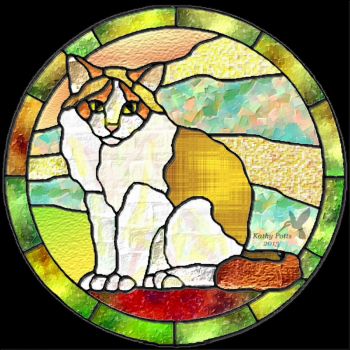 While a lot of you may know the story of the two puppies that we recently rescued, one of which now lives with one of our own, Libby...aka JavaSage....and is named CallieLou.....it may seem strange that I am posting a design with a kitty cat on it. The fact is that I don't have a template to use for a doggie. Anyway, when I came on today, the first puzzles that I saw were posted by 2dogs7cats......aka Edie. I went over to her puzzles and began reading stories of her love for animals. Among them were the story of two of cats she had rescued. Gail, aka Octomom and Libby...aka JavaSage, are two others that I know here of Jigidi who open their hearts and home to animals that are in need. I know there are many others here that do the same. Without these warm and loving people, thousands of animals would be euthanized. But instead, they are repaying their owners by worshiping them and loving them and giving them joy beyond measure. I speak from the heart as I know the feeling very very well!!! Bandit, one of my avatar's, is my delight.

The world will be a better place if we all could find a place in our hearts to help an animal out. Whether it be adopting one, fostering one, having your animal spayed or neutered, contributing to your local Animal Shelter by donating food, rags, blankets, feed dishes, etc., or even reporting a case of animal abuse............PLEASE do what YOU can to help an animal in need!!!! The world could use your help and love!!!!

If you have a wonderful story to share and have time to share it, please feel free to tell the story here or give a link so that it can warm all of our hearts :-)))))))))

PS> I am posting this puzzle solo for today in several different categories so don't be surprised it you see it more than once.
Created by Hummingbird59 Published 17 June 2013
Why this advertisement?

I was giving this some thought today Edie. I agree with you 100%. The answer lies with people having their pets spayed or neutered!!!! I know it is expensive, but it is the only way to get the problem under control and save lives. People can only have so many animals and when they have reached their limit......the poor guys still left out there pay the price usually with their life :-((((((( Just today, someone put out a pit bull mix. The dog was BEAIUTIFUL!!!!! He looked in great condition....fat and fit. We are hoping that he was simply lost since he was in such good condition. He was acting a bit strange......hiding in the corner of our garage. I spoke to him and I do believe he would have let me pet him, but he was so BIG I was a bit frightened of him and what he could do if he decided he didn't like me. Hubby called a neighbor over and he was indeed able to pet him!!!!! I am thinking that he was just simply scared to death!!!!! Poor thing!!!!! He did not even offer to bother Smidgens, the outside cat, so he is either use to cats or was ill or scared. Ended up calling the Humane Society and they came and got him. They think that he definitely belongs to someone and is simply lost. He allowed them to pet him and put the leash around his neck and followed them to their automobile!!! Hopefully he is micro chipped and his owner can be found!!!! I want to check on him in a few day and see what they found out about him.

The shelter we rescue from is not open for public adoptions. It's an ongoing political battle. The only way a cat can get out of there is through a rescue like the one I'm with. The problem is there is such overcrowding at this shelter that they never seem to be able to get rid of the URI that infects it and sometimes even worse, distemper and ringworm have made their way through. So any rescue that takes them knows right off that they will need vetting and meds and hopefully nothing more. Some however end up very sick and hospitalized on IV fluids. This drains a rescues limited resources tremendously and more and more rescues are by passing this shelter for just that reason. I one day they took in 38 strays. There is limited space so twice a week in winter and 3x a week in summer a vet comes in the morning and euthanized all the marked cages. First to go are feral, sick, and shy cats. Then anything goes, longest there, pregnant moms, moms with kittens, just kittens. Last year they had one week where 75 cats most of them healthy were euthanized. The biggest problem is that there are a lot of low income people, there is a two cat limit and there are not any low cost spay/neuter clinics in the area and the ones that are around have waiting lists up to 6 months. I don't see a solution to their problem any time soon. There are many demonstrations held at the shelter to try and get it opened for public adoptions but that isn't the answer. People will adopt kittens and not get them fixed and add to the problem. When they adopt from our rescue they prepay the spay/neuter at the time of adoption . More low cost or free clinics is the answer in my opinion. Sorry for rambling. :-)))

Edie, On one of the other kitty post, someone mentioned an organization called BEST FRIENDS.

I had never heard of the BEST FRIENDS so I Googled it as Jo mentioned . I found this statement to be awakening on their site >>>

"Meanwhile, our national initiatives focus on the animals most likely to enter America?s shelter system---cats, pit bull terrier type dogs and cast offs from puppy mills. More than 70% of cats who enter our nation?s animal shelters are killed, and many of them are outdoor, community cats who are too skittish to find homes. An estimated 25% of all dogs entering shelters are pure breeds from puppy mills, and the vast majority of dogs killed in shelters are pit bull terrier type dogs.

Karen, I would LOVE to see some photos and I wish you guys the best of luck with the sale!!! Please let me know how it goes?

Thank you Kathy for creating this puzzle and helping to bring awareness of the plight of many of our animals. Cats even more so than dogs seem to be thought of as 'disposable' by so many people. The kittens are free, people don't bother getting them spayed or neutered and then when they decide to move, have a baby, or get a dog the cats are simply put outside to fend for themselves. Cruelty and neglect laws that do exist are not enforced and the punishment is often less than a slap on the wrist. If this puzzle helps even one animal find a home or even get a meal then it was worth it. Thank you

Kathy, it would be beautiful! We have so much donations coming in for the sale. I feel like I have a better hand on my areas for this sale than I one I did in May for the Animal Protective League. I did two puzzles with photographs of some of the plush toys that had come it. For this sale I also help set up toys, purses, suitcases, and baby items. I helped set up yesterday, today and will also Wednesday afternoon, Thursday and finish Friday morning before the doors open at 3pm. Maybe I'll take an overview photo of our store and create a puzzle.

Karen, I will have to see what I can come up with for a CallieLou tribute :-)

I hope that your efforts and collectible/garage sale go well this Friday and Saturday!!!! Would love to hear a report as to how it goes!!!!!! Wish I lived nearby as I have some things that I would donate!!!!! I wonder how the pattern above would look on a tote bag or even a t-shirt.....printed out like you had mentioned with the ink printer?????

Kathy, the puzzle was very pretty and fun to solve. You have your stained glass puzzles down pat. There should be a dog stained glass puzzle in honor of Callie Lou. I started following your puzzles when you and your husband had rescued her and her brother. I live in central Illinois and all day today I volunteered in an empty store that will be used for a collectible/garage sale this Friday and Saturday. People donate items and we display them and try to sell everything . It's for the Benld Adopt-A-Pet.

Thank you so much Barb!!!!! I figure if only one animal is helped, it is worth the shot!!!! I enjoyed creating the kitty above and figured it may as well serve a good purpose too along with people enjoying solving it as a puzzle :-))))))

I think I said this before but again, I love your stained glass puzzles. Would love to see a dog too, if you ever find a template for one.
Thanks also for your comments. I love Edie's stories and have great respect for what she does in the way of rescuing animals. And Callie Lou is on my favourites list which I check regularly for updates. I've read both heart breaking stories and heart warming stories and I do hope your puzzle and comments encourage people to do what they can. Thank you. :-)