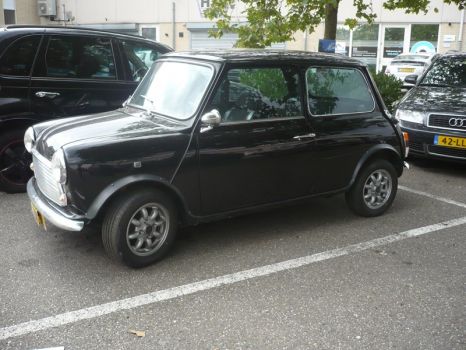 When I lived in England I drove a little sweetheart sort of like this one (I had the original plain, smaller wheels and no fender/fairing on the wheel wells, also original). I rolled it (and did a 180) on an icy road (one of those 1-lane jobs over a mountain pass in the middle of nowhere, probably been a road for 2000 years) and still managed to drive it home. This car represented independence and freedom for me after over a year of relying on someone else for driving me. I miss him (the car, not the driver)!
Created by Mazy Published 17 June 2018

Right? mine had been parked in a barn and it had mushrooms growing out of the cardboard dashboard, but a little wipe-down with a mild bleach solution, and I had a great little car.

Oh my gosh, brings back memories!
My first car was just like this one, how I loved it!
What a fun car to drive!

actually when my English ex and I bought the house, the neighbours were warned a "foreigner" was moving in (me, a Canadian of UK heritage). So she would have been phoning her one and only friend, a fellow net-curtain-lady (fellow?) and whinging on emphatically and incredulously but mostly indignantly. But local calls in England are expensive so she would have been too cheap to go on at the length she wanted to. So would have been moaning to herself all day and into the evening when she quickly ate her tea (dinner) of tea and toast over the sink. Quickly so she could get back to her net curtain monitoring.

I am sure whomever she was on your street, she was furiously writing in her journal about the "crazy woman" who came home with a smashed up car and parked it RIGHT THERE, where she could see it!

most neighbours were good but there's always the net curtains lady - you know, the English version of a busybody who watches everything from behind her lacy curtains. Since the steps to the houses are right to the narrow pavement (English for sidewalk) and no one had a yard, "net" curtains were sort of a ubiquitous private screen. I hated 'em.

Absolutely love it. I am picturing Mr and Mts Proper next door coming out to their freshly washed (not yet rusted out) Rover and being aghast at what the neighbor dragged home.

I lived in one of those stone-block two-up-two-down row houses (like in Coronation Street, but that's brick and big city. I was in an old northern mill town north of the Industrial revolution blight). Parking was at a premium and the spot was right outside my door with inches to spare front and back. Good old mini.

That actually got a laugh (out loud) from me, picturing this semi destroyed Mini perfectly placed in the spot.

found the glasses unharmed in the back seat the next morning in my perfectly parallel parked mess of a semi-wreck! completely unaware I didn't have them or windscreen, all the way home. Best example to myself of how shock works...

So the trick had an even higher level of difficulty. Glad you were ok. Probably best you did not have glasses right away or you would have been to upset with the damage to safely drive home.

Thanks msbonne...! Well it was a 360 roll AND a 180 yaw, to be precise... long before cell phones, and at night time in winter. I remember driving home unaware that my glasses had come clean off and that the windscreen was gone (obviously in shock, bit no other harm done). It was only a ten minute drive down to my home but on a road that likely wouldn't see traffic til sometime in the morning, just a piddly country lane, one of those ones so old it has literally entrenched itself down into the landscape. The car suffered a bit of crumple on the pax side roof/windscreen strut and pax side front fender was smushed, but was repairable, sort of. I drove it for at least another year. THANK YOU SEAT BELT. and Mini!

Love all of these stories. Mazy. I am surprised that not only did the vehicle survive the 180 roll over, but you were unhurt, and able to drive home. Amazing. (or should I say aMAZYing).

Haha! I love your solution over a beer! I was pretty heartbroken when I had to write mine off, too. I used to do 90mph downhill on the motorway en route to my bi-weekly 3-day weekend in the Lakes District. I remember passing this brand new Jag, with this toffy-nosed posh snob at the wheel, he took one look at me in my bandanna headband and floored it. Just to pass me, then he slowed back down to the english motorway speed limit, 70mph. And I passed him going downhill on the next hill... I think he thought I was winding him up because he looked furious. I just had the pedal down to what I figured was max continuous power, and that was a different speed depending on how gravity was acting for or against me. I think I might just have managed about 60 or thereabouts uphill. Two people and provisions in the car....

I had one in my college days -- a plain simple 850cc. Wanting speed, I took the engine out and had it modified by someone who didn't know a thing about British engines. Went like hell for about 100 miles when it blew apart! The same weekend a friend of mine rolled his 1275S. While lamenting our losses over a beer, we realized that together, we had one car -- flipped for it and he ended up with the fasted "850" in the world, ugly but really quick!
Dave