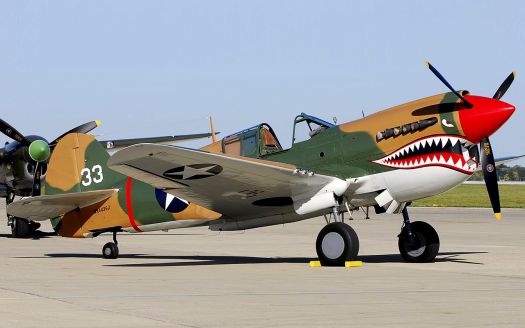 1st Lieutenant Erik Shilling of the U.S. Army Air Corps created what would become the renowned insignia of the American Volunteer Group, the fierce tiger mouth painted on the noses of their P-40s. As he later recalled, "It's always been said that the tiger mouth came about after we saw a picture of a P-40 being flown by 112 Squadron in North Africa. That's not true. I was looking through a British magazine one day and saw a photo of a Messerschmitt-110 with a shark face on it. They were the 'Haifisch Gruppe.' I thought it looked perfect for our squadron insignia." Shilling chalked a shark mouth on his P-40 to see how it might look; when he asked Chennault for permission to use it as a squadron marking, Chennault saw it as the group marking. Shilling ended up chalking the shark mouth on all of the P-40s before they were painted. "That's why there were no two of them with the same shape of mouth."

This aircraft is a P40K-5-CU built by Curtiss in Buffalo, Serial No. 42-9733. The aircraft itself served in the Aleutians, where it crash-landed and was written off. Subsequent restorations (and crashes) have brought it to Delaware, where it is registered as NX 4436J. You can see the registration number under the horizontal stabilizer. The object behind it looks to me to be the port wing and engine of a P-38.

It is not a Tomahawk. That British term was applied only to the P-40B and P-40C. The British term for the P40K would be Kittyhawk III. However, the USAAF never used either term, eventually applying the name Warhawk to all models of the P-40.

Is it in "the flying tigers paint scheme", as southerner suggests? My answer would be yes--with some qualifications. The appellation "Flying Tigers" was not official during World War II, and has unclear origins. The famous shark's mouth decoration was first applied to a P-40 by RAF No. 112 squadron in the Western Desert, and was later painted on P-40s practically everywhere, and on many other types of aircraft. One cannot conclude that an airplane is connected with the Flying Tigers just because it has teeth.

This paint scheme is not the paint scheme of the American Volunteer Group, which was a quasi-mercenary organization. They flew a somewhat basic version of the Tomahawk II diverted from a contract Curtiss had with the British. That aircraft had two .50 cal in the nose and two .30 cal in the wings, not the six wing-mounted .50 cal shown here. Since the AVG planes technically belonged to China, they carried the Chinese star, not the US. The AVG was dissolved in July 1942, and only five pilots transferred to the successor 23d FG, largely because the General sent out to persuade them to chose to threaten them instead.

The 23d FG, and ultimately the larger 14th Air Force, inherited (or borrowed?) the Flying Tigers appellation because of its popularity with the American press. A cartoon of a tiger with wings was adopted as an insignia. Although you cannot see it in this picture, because the wing blocks our view, it is painted on this plane just below the cockpit. The American star insignia shown was used by the 23d Fighter Group from the time of its formation to July 1943, after which date wings and a red outline were added to make the insignia more distinctive.

My bad. It wasn't labeled on the picture I saw. Went with what I thought it was....