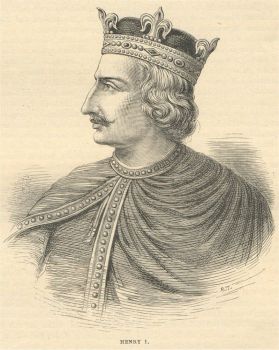 Henry I was the fourth son of William the Conqueror and ruled England from 1100 until his death in 1135.
Created by mikemac Published 26 May 2017

Image copyright: image is in the public domain

I've moved back to the country and my internet service has been disrupted.

I am pleased that you all liked this post.

Bibliophile, that is very interesting that your line descends from William the Conqueror. In using a software application that links up with Ancestry.com, I was identified as descending from that line. I do not have that exact information on this PC but it would be interesting to see where your linage divided from mine. I doubt that the information is correct in my case but it is interesting to look further into it. I had the image from the previous research I did on Ancestry.com.

This is so good, I love the sepia colour pictures and have enjoyed solving this one, thank you mikemac!


Henry became King of England following the death of William Rufus, who had been shot while hunting. Henry inherited the kingdom of England from William Rufus, giving him a claim of suzerainty over Wales and Scotland, and acquired the Duchy of Normandy, a complex entity with troubled borders.

On 11 November 1100 Henry married Matilda, the daughter of Malcolm III of Scotland. ] The pair had probably first met earlier the previous decade, possibly being introduced through Bishop Osmund of Salisbury. Historian Warren Hollister argues that Henry and Matilda were emotionally close, but their union was also certainly politically motivated.Matilda had originally been named Edith, an Anglo-Saxon name, and was a member of the West Saxon royal family, being the niece of Edgar the Ætheling, the great-granddaughter of Edmund Ironside and a descendant of Alfred the Great. For Henry, marrying Matilda gave his reign increased legitimacy, and for Matilda, an ambitious woman, it was an opportunity for high status and power in England........