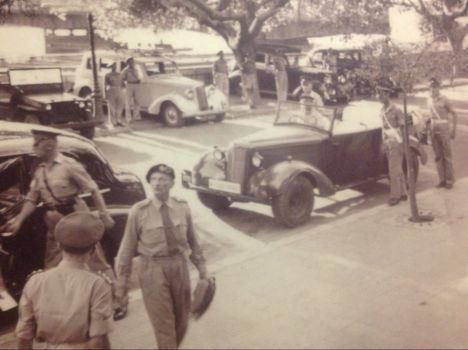 My Father guarding Field Marshal Montgomery my Father is the one not stood to attention next to the open top car
Created by hugospencer Published 19 February 2018
Why this advertisement?

Yes my Father is the one stood next to the open top car with his compadre behind him, he also said he got shot at more by drunk Americans than he did by the Germans when patrolling around the no go areas in, the reason he became a mp he was seriously injured twice when he was a tank driver in the 4th royal tank regiment and thought it would be safer and less stressful some of the stories he told of N Africa are quite funny.

Fruttel1 and willey19. Gentlemen, you are both quite wrong! The war in N Africa had been to-ing and fro-ing for some time long before the Americans arrived. Operation Torch was a three-day joint operation by the Allies in November 1942 - the very first time the Americans stepped foot in N Africa. By that time Montgomery had already driven (but not quite defeated) the Afrika Corps back. A final effort was needed, and it was only then that the Americans were involved - for three days - and they even almost screwed that up for everyone! The American hatred for Montgomery is well-known, and unfortunately, it's a minority of armchair generals who have never studied the war that like to pontificate about things they know nothing about. The other thing to mention, is that this is a fun puzzle site intended for family leisure and enjoyment; it is NOT a forum to air political ideologies or arguments.

That pic is quite a gem, Hugo, great you shared it. Just to make sure: your father is the one standing next to the left-door of the jeep like car? (is he standing just behind that small tree, with one man standing behind him?)

Gen Patton & his troops did all of the work & FM Montgomery took all of the credit, but who really knows.