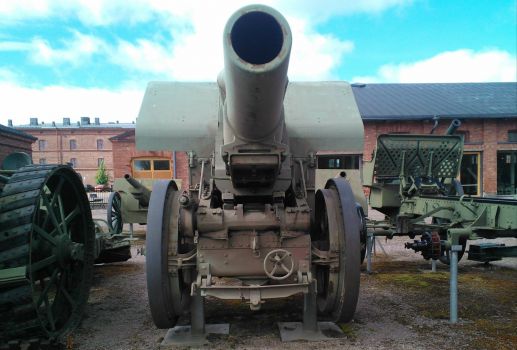 210 mm howitzer model 1917
Picture taken at The Artillery Museum of Finland (Hämeenlinna)
Created by jarno_x Published 17 August 2015
Why this advertisement?

This artillery piece was built in Germany and designated the Langer 21cm Morser 16. It was considered a heavy mortar rather than a howitzer, and was used against fortified positions. After the Armistice, Germany was allowed to keep only two of them. Sweden bought a dozen of them in 1918. During the Winter War of 1940, Finland bought four of those guns from Sweden and redesignated them 21cm Haubits m/17.

This weapon had heavy wheels made from oak and iron. Recoil was handled by a bulky pneumatic recuperator above the barrel (not visible in this picture). The barrel and the carriage could be towed separately by motor vehicles. The shield was detachable. The barrel could be elevated to 70 degrees; maximum range was 12,000 yards.

When Finland purchase their four weapons, they had no suitable heavy towing vehicles. Thus they were stored and not used during the Winter War. A year later, better towing vehicles allowed three of the mortars to be used in the Continuation War. Their speciality was destruction of bunkers by indirect fire. That technique required 20 or more shots with the APHE shells supplied from Sweden; however, when more modern shells were supplied by Germany, the dispersion was greatly reduced and a bunker could be destroyed with as few as three shots. The Finns called the technique "tikkaus-ammunta"--pinprick shooting.