Neighbour kitty of my best friend.... 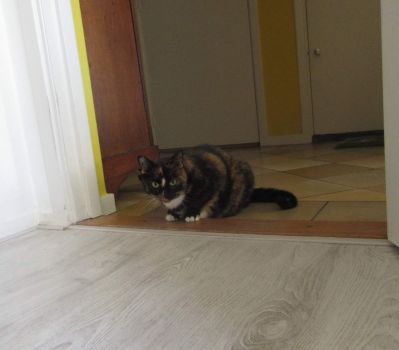 She's the sister of next door's 'bully' kitty and she's pretty, but according to my friend also feisty. She's sitting in the hall on the threshold of the living room here....she had come in through the open back door and announced herself...OMG that voice!!! I sat next to the open living room door so I wasn't aware she was there.....man....she's LOUD!!!....lol
Luckely Dorus was in his bed in the other room, because she'll often come in, empties Dorus bowl of biscuits and as a "thank you" she'll often start a fight with him!:(
Created by Impie Published 6 August 2020

Indeed, GG. Dorus also could get in serious trouble entering people's balcony who don't like cats! My friend is very good friends with her upstairs neighbour, but when in the beginning Dorus visited her balcony every time, she complaint to my friend that she didn't like Dorus on her bed and wasn't happy she couldn't -even on the first floor- leave her balcony door open unsupervised. When my friend told me on the this phone I suggested she'd put plant pots on top of the wall and luckely she followed my advice and since then Dorus can't get up that wall, in fact he's not even interested anymore. But every garden has two of those brick walls to devide the gardens from each other (they're about 2 metres high and some 1 metre wide) but most of the gardens are devided by hedges from the wall to the back of the garden....cats can easily crawl under or through the hedges, so Dorus goes to the next garden and does his climbing act!!! :-))

You're right, lurdo, but no-one in the street does even 'know' this kitty and the bully's humans or whether they're at home or not, there's only a window open day and night for the cats(?) so they're actually on their own and seek for company, but probably never learned to really socialize!

I think this kitty must learn to be polite, she must not be agressive, being friendly will be better.

Oh Impie, I wouldn't like someone else's kitty sleeping on my bed either! It is kind of sweet, though, that these cats feel welcome to go in and out of nearby homes! ♥♥

Yes, Marilyn, she definitely looks cute and beautiful, but she has quite a big ego that must run in her family!:)

They sure can, tisketsmum, she has slapped my friend a few times too when she told her to go to her own home after she had decked Dorus!

She sure is beautiful, GG. Yes, she lives right next door to my friend and comes either through the catflap at the front (via her small balcony) or from under their hedges through the open back garden door which is open for Dorus to go in and out! My friend is a softy and she thinks she can't object to it because she knows Dorus is also getting in and out other peoples homes. He even 'slept with the neighbour' (☺) one storey higher up!!! He had jumped on the wall and from there onto their balcony into their bedroom and when her neighbour woke up after his night shift, he looked Dorus in the eyes who was lying at the foot end of his bed! :)) I laugh, but actually it isn't funny at all....I know I wouldn't like it one bit if other people's kitties slept on my bed!

She is, Ella. Your Kailey sound like Goofie, he didn't allow other kitties in his garden and would grab them when they did, I'm glad they never got in my home. I'm also afraid, since Dorus is such a softy, that it will make him insecure when he doesn't seem to have the "safe haven" of his own home to stay away from the bullies!

She is indeed beautiful, Anne. I tried to lure her to play with my camera cord, but she stayed put. My friend warned me for her as she's not the nice girl you'd think she is at first glance! :)

I think you're right, dhi, she probably needs to have that attitude as her brother is the bully of the neighbourhood!....BTW....he's also very loud! :)

You're not wrong there, nillie and like with humans we would like them to all get along, but that just seems impossible I'm afraid. There're always leaders,bullies and victims! two or four legged! :)
Have a nice weekend ♥♥

I've seen that attitude! ☺☺☺ She reminds me of my sweet little Lakota!

Well, kitties affairs sound as if they are furry four leged humans:-)))) Thanks Impie, and have a nice weekend♥♥

She is beautiful, but oh my....what a nasty girl she is too! I'm glad Dorus missed her visit!

The neighborhood kitties are pretty bold! I had my back door open once the neighbor's kitty wandered in. Kailey was asleep in the living room so I quickly escorted him out. Had Kailey noticed him, she would have decked him but good!

Wow, she is a beautiful kitty. So, does she live next door and just invites herself inside your friend's home? ?

Looks can be deceptive :-(

She is a pretty calico girl with little white toes, so cute.