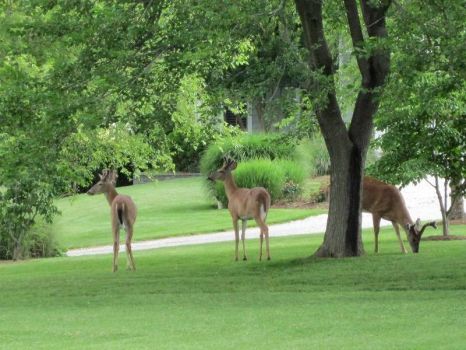 Created by maggie40 Published 18 June 2012
Why this advertisement?

The irony is, those 1950s deer were imported for hunting purposes. But since their descendants mostly live in suburban areas, it's illegal to shoot them and the population is growing by leaps and bounds (literally).

We have deer problems where I live, too. But here, they were the original occupants. Your location sounds like the exception, not the rule.

I have to speak up here. Deer have encroached upon humans' habitat, not the other way around. At least in Indiana, where we live, deer were almost extinct in the early 20th century. In the 1950s, several herds of deer were imported from another state, and they multiplied very successfully. When we first moved here 30 years ago, we rarely saw a deer. Now we regularly chase them out of our yards, they destroy or damage expensive plants and trees, trample small pet dogs, run in front of our cars, and even bust into our houses through glass doors and picture windows. The deer population is much larger now than it was 100 years ago. i hate to think what it will be in another 30 years. In the country they are still rarely seen. They find suburbia to their liking because they are safe here. Unfortunately!

Actually, suburbia has encroached upon Bambi's habitat. We invaded them, not the other way around. I have no quarrel with man's taking the land for his use, but it is a good idea to remember who had it first.