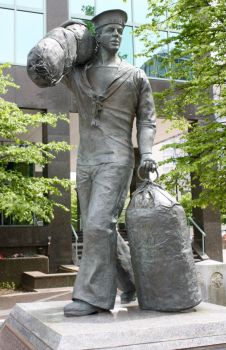 In June we travelled by rail from Vancouver (British Columbia) to Montreal (Quebec) where we spent five nights. We then took an overnight train to Moncton (New Brunswick). Next we drove to Prince Edward Island, Cape Breton (Nova Scotia), and flew home from Halifax.
Created by gemstone Published 29. Oct 2019

You are very welcome, Marina. And thank you for taking the time to comment. I appreciate it. ❤️

Sorry for the typos. I re write the comment : A very realistic statue put there to honor all soldiers fought in Great Wars. TFS. Marina.

And it was done by private donation...from retired Chief Petty Officers...who wanted to acknowledge the "common" men who served... ❤️

What a great sculpture to have on the harbor front!

We had a friend who was like an extra grandmother to us. When Ken and I first toured England we visited her brother in Portsmouth. He was a merchant marine and refused to talk about his experiences during the war as he watched seven ships...with many friends aboard...go done...and of course, getting supplies delivered was more important than rescue. They WERE a tough lot, Robbie, and we will never see their likes again.

P.S. My cousin in London still says, "You folks in the colonies"...but tongue in cheek, of course.

You're right gem, he was in one of the last convoys in the north Atlantic aboard a destroyer. They were attacked by a U-boat and lost three ships but he never talked about the actual fighting. I only heard stories of disputes between his own side in pub fights etcetera! He said he got on with most but he and his Aussie and New Zealander mates were always called "those bloody colonials" by several RN officers! His generation are a tough lot! I posted one photo of him, cannot find the one like yours.

It's difficult to imagine your dad as young, svelte, and living a life that you were unaware of isn't it, Robbie? I have a picture of my dad receiving the British Empire Medal at Government House just after I was born...and thought, "Oh my, he's handsome." But it was a different lifetime for him that I was not included in...or ever understood as soldiers never spoke about their experiences. ❤️❤️❤️

And it was usually two to a bed, Impie...one working, one sleeping, then switch. Yuck! ;)))

Hi Faye, I'm sure my dad also carried a hammock....it came with the 'outfit' though I doubt he could use it as my dad was "marconist first class" on a submarine of the Dutch Royal Navy ....from his stories I remember they slept on a bunk beds:-)))

Like Impie and Jill mentioned, my dad also went through Halifax when he joined the Royal Navy in WWII. I have seen a photo of him looking just like this sailor. Thank you gem!

He's also carrying his hammock, Impie...which your dad would well recognize! And if you looked at the link...I'd be willing to bet he could name all the vessels shown on the bronze plaques. ❤️❤️❤️

He probably did, Jill. There were a number of Allied Forces trained in Canada and the troops and supply convoys all sailed from Halifax. And speaking of training, quite a few Americans came to Canada to enlist before the U.S. joined Britain and the Commonwealth countries in late 1941. And Canada housed Camp X where spies and saboteurs were trained to fight the Axis powers. Even Tito, the President of Yugoslavia, was trained at Camp X. ❤️❤️❤️

Lovely puzzle and obviously a great harbour. Now I wonder if my dad came and went from that harbour as he was in Canada for a period of time completing training during WWII with the RNZAF before being posted to Ealing in England where he flew his missions from. Thanks Suzy

I'm looking through my Dad's eyes to this statue.....he would've loved it....being a sailor in WW-II.....
I remember the duffel bag (with his number printed in it) in our cupboard upstairs! ♥☺♥

Halifax was also a happy place, Hanne, as this is where many, many immigrants entered Canada to start new lives...similar to the U.S.A.'s Ellis Island.

That's why Halifax is a name known to me since I was very young! WWl and WWll - yes all Canadian troops were... I've read about it! I understand why he looks a bit worried..

A very fitting tribute. Thanks, Faye, ♥♥

Halifax is home to our large Naval Base on the east coast of Canada, Hanne...as it has the third largest harbour in the world. All the troops during WWI and WWII were shipped out from here. In one of my other pictures of Halifax you can see HMCS Halifax returning home...probably after duty in the Middle East. Troops, ship building, war ships, supply ships are all part of the history of Halifax. One of the worst disasters of WWI occurred here:

He looks as if he's going out - or has come to a place where he hasn't been before... thanks Faye!