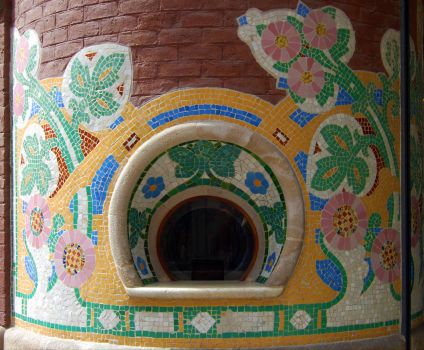 The Palau de la Música Catalana is a concert hall in Barcelona. Designed in the Catalan Modernist (Art Nouveau) Style by the architect Lluís Domènech i Montaner, it was built between 1905 and 1908 for the Orfeó Català, a choral society founded in 1891 that was a leading force in the Catalan cultural movement that came to be known as the Renaixença (Catalan Rebirth). It was inaugurated February 9, 1908.

The project was financed primarily by the society, but Barcelona’s wealthy industrialists and bourgeoisie also made important financial contributions. The Palau won the architecture award from the Barcelona City Council in 1909.

The concert hall of the Palau, which seats about 2,200 people, is the only auditorium in Europe that is illuminated during daylight hours entirely by natural light. The walls on two sides consist primarily of stained-glass panes set in magnificent arches, and overhead is an enormous skylight of stained glass designed by Antoni Rigalt whose centerpiece is an inverted dome in shades of gold surrounded by blue that suggests the sun and the sky.