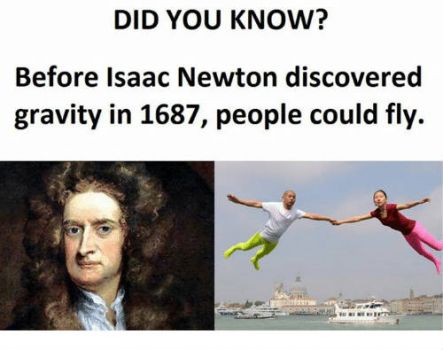 Too late for this one as well (❀ᴗ❀)

I was close, but no cigar.

I didn't know this one, so no point for me.

Did someone get turned into a newt? So, then--Sir Isaac was a witch?

Joe that was groan worthy! LOL :))

The newton (symbol: N) is the International System of Units (SI) derived unit of force. It is named after Isaac Newton in recognition of his work on classical mechanics, specifically Newton's second law of motion.
One newton is the force needed to accelerate one kilogram of mass at the rate of one metre per second squared in the direction of the applied force.
In 1946, Conférence Générale des Poids et Mesures (CGPM) Resolution 2 standardised the unit of force in the MKS system of units to be the amount needed to accelerate 1 kilogram of mass at the rate of 1 metre per second squared. In 1948, the 9th CGPM Resolution 7 adopted the name newton for this force. The MKS system then became the blueprint for today's SI system of units. The newton thus became the standard unit of force in the Système international d'unités (SI), or International System of Units.
This SI unit is named after Isaac Newton. As with every International System of Units (SI) unit named for a person, the first letter of its symbol is upper case (N). However, when an SI unit is spelled out in English, it is treated as a common noun and should always begin with a lower case letter (newton)—except in a situation where any word in that position would be capitalised, such as at the beginning of a sentence or in material using title case.

lol...I guess it was lost in translation.

@Max_Tooney I could have sworn his Sir name was Neuvo Tonne! Thanks for the correction.

His REAL birth surname (should I say Sir name, haha!) was Foot-Pounds. Isaac Foot-Pounds. Hope that doesn't give away the answer.

Drat. I don't know this one, and I'm ashamed of myself.

I think I've got this one.

A pox upon the man!


He didn't understand the gravity of the situation.